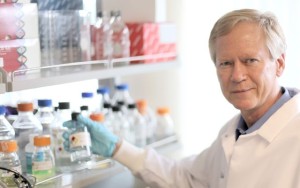 As the U.S. Department of Defense continues to test for live spores in more than 400 batches of anthrax sent to a reported 66 labs in 19 states including Arizona, geneticist Paul Keim, Ph.D., suspects the bacterial spores may be able to bring themselves back from the dead.

“I’m calling it the Lazarus Effect,” said Keim, referring to a Bible story in which Jesus restored health and life to Lazarus of Bethany after he died.

Keim says the spores were declared dead after being zapped by massive doses of radiation and then sent from Dugway Proving Ground in Utah to military bases to test their anthrax detectors.

“This is the U.S. Army. They are working with a very dangerous pathogen. I have no doubt that they did extensive testing of these spores when they came out of the radiation to see if they were alive or not. The way that you do that is very simple. You test them by putting them on a Petri dish with growth media and look to see if anything grows. It’s what I refer to as high school microbiology.”

The radiation, says Keim, severs the DNA molecule. “Broken DNA means that you’ve killed the spore. That’s what they would be trying to do, kill the spore by breaking the DNA and yet leave the spore intact so it would be useful in the detectors.”

But perhaps in those trillions of spores with broken DNA, Keim hypothesizes, there were a few of them that managed to repair themselves. “Not right away, but perhaps over a matter of storage over weeks, months or even years. Those little spores are sitting in there with broken DNA and very rarely a spore manages to stick its DNA back together. And once it did that, then it was able to revive and grow. And so lots of spores stored over long periods of time, perhaps a very, very small number of those spores resurrect themselves from death and start to grow.”

The Northern Arizona University Regents’ Professor of Biology and director of the Microbial Genetics and Genomics Center (MGGen) says repairing DNA is a critical biological function. It happens sometimes in cancer cells with radiation therapy. “You don’t destroy it entirely. DNA is very long molecule, so it’s like having a big spaghetti noodle and you break it in half. Putting that back together is very hard. You could tie a knot and that knot would then be what some cells can do and the cancer cells can sometimes repair their DNA and escape the effects of the radiation by repairing it. And that’s, of course, what we think might be happening in these inactive sports. They’ve somehow figured out how to repair their DNA.”

Keim has spent years studying this phenomenon, called recombination, in E. coli bacteria. “We know a lot about repair systems in biological organisms, but spores are not much more than just DNA and proteins packed together really tightly. They look like little footballs and have a very hard coat on the outside of them. They don’t have much of a metabolism going on, so they’re not doing any biochemistry. They’re supposed to be just sitting there. In a live cell, a vegetative cell, this wouldn’t be such a surprise. But in a spore, it must be a very rare event.”

Keim’s Lazarus Effect theory can be tested because he says the repair process is not going to be perfect. “There will be evidence about how it works from looking at its DNA. So, I would expect the Department of Defense to actually be doing whole genome sequencing on these resurrected spores and looking for the scars.”

He notes there is absolutely no threat from the few live spores found in the anthrax shipments, which were sent from Dugway Proving Ground in Utah, as it takes some 8,000 spores lodged deep inside the lungs to make someone sick. But the idea that there’s something about spores that scientists don’t understand yet – perhaps that spores are rising from the dead – has resurrected new interest in this microscopic germ. QCBN