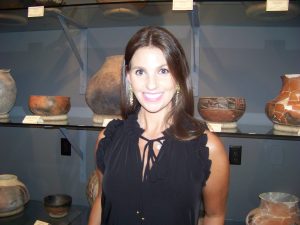 Admission is free for those under 18, veterans, active-duty service members, Native Americans and NARM members.

The past few months have seen major increases in visitation to unique educational experiences provided by the Verde Valley Archaeology Center (VVAC) in the heart of Camp Verde.

Executive Director Monica Buckle attributes much of that increase to the “phenomenal” new location of the center in its new building at 460 W. Finnie Flat Road in the middle of town. “We ran out of space at our past site, so local donors have been exceptionally generous in helping us fund the new museum site.”

Buckle, a Cherokee native of Sallisaw, a small town on the Arkansas River in eastern Oklahoma, says she’s thrilled to be leading the only organization in the greater Verde Valley area that is dedicated to the collection, care, management and curation of archeological artifacts found in the Verde Valley.

She explained that for decades, nearly every major artifact from the Verde Valley had been moved to another location. She said the loss of artifacts through the years has been staggering, and that while Verde Valley artifacts are on exhibit in museums and universities around the world, it was only recently that local people became interested in preserving and restoring the continuity of Native American people and communities in Central Arizona. The Navajo, Hopi, Apache and Yavapai-Apache tribes allow the VVAC to be the foremost research and educational institution devoted to preserving, interpreting and celebrating the archaeology here, where Indigenous People have lived for thousands of years.

She credits much of the enthusiasm for creation of the VVAC to Paul Dyck, who moved to Arizona and became a local Western painter. He ultimately lived in Rimrock, a small community 10 miles north of Camp Verde. During its first few years, the museum grew slowly, but it became a non-profit 501(c)(3), now governed by a board of 10 directors who are led by Cheri Meyerhofer.

Once the VVAC bought the 11,000-square-foot, one-story building it now occupies for $1.1 million, it spent months remodeling the former medical facility into a visually appealing facility with an entry hall, classrooms, exhibit rooms, research and educational laboratories and office space. The interior areas now feature murals and other artwork and exhibits that vividly reveal the creativity and lifestyles of the various tribes represented.

“A critical factor that lets us operate in our new facility is our large team of volunteers. We have more than 700 of them and they make possible all the exhibits and programs we present. What’s more, the number keeps growing,“ Buckle said. She also praises the leadership team at the Museum of Northern Arizona in Flagstaff for its continuous support of the VVAC.

Buckle spent much of her early adult career in New York City, where she owned and coordinated galleries that featured Native American artwork. She earned her Bachelor of Science degree from Lynn University in Boca Raton, Florida, and later received a Master’s of Art Business degree from Sotheby’s Institute of Art in New York. She recently was named to the board of directors at the Mesa Verde Foundation in Colorado, which is an official philanthropic partner with the UNESCO World Heritage site program. Buckle also is affiliated with the Tucson Museum of Art and serves as a guest curator and Native American representative.

Buckle speaks enthusiastically about what she views as the future for the VVAC. “We are becoming a stellar place to learn and to grow in our knowledge of history and culture in the region. We want to make our program accessible to everyone – from youngsters to seniors – to have a meaningful learning experience in our hands-on experiential exhibits. Museums such as ours are the foundation for instilling pride in the past and opportunity for the future.”

The VVAC is open 10 a.m. to 4 p.m., Tuesday through Saturday. The “Kids’ Adventure Room” can be rented for children’s parties. Tickets are $10 for adults 18 to 64, and $5 for those 65 and older. They may be purchased online. Admission is free for those under 18, veterans, active-duty service members, Native Americans and NARM members. FBN