You are here: Home / Local News / Pilot Fish May Help You Make the Big Catch 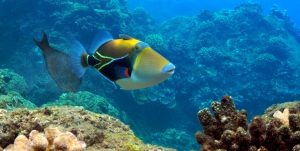 In any case, McDonald says leaders need to get to know the workplace pilot fish because they are highly influential.

Experiencing the gentle, colorful tropical world under the sea off Maui’s scenic Honoapi’ilani Highway feels like you’re in a Disney mermaid movie, unless you’re snorkeling with someone who delights in taking you to places to see some really interesting creatures.

Hawaii’s Sandra Romer is one such snorkeler. She can free dive to depths way beyond normal human ear pressure tolerance, doesn’t get cold or wrinkly in the ocean and can hold her breath for, like, half an hour.

If you’re going to put on your flippers and be in the ocean anyway, Sandra figures, why not get close to something weird? So, after swimming past the happy clown fish, the beautiful humuhumunukunukuapua’a and the sleepy sea turtles, Romer delights in finding a pale green cauliflower-like frog fish that hop-walks on its fins, spotted eels that go on forever in their snaky, snarly way and a wall of fish the size of an IMAX screen.

And sure, just when you’re getting comfortable with that massive amount of fish doing that synchronized swimming thing, you notice something bigger. . .maybe three feet long with a hefty dark presence swimming slowly, stealthily along the ocean floor with a couple of suspicious-looking buddies almost as big.

Sandra called them “jackfish” and found them fascinating with their shadowy predacious essence. But I got the feeling the silvery fish in the giant school nearby were keeping an eye on them, too, especially when they slid in real close, changed up their direction and darted straight into the perfectly conforming fish. “Whoa!” I garbled loudly underwater – and then discovered how fast I could swim.

I’m guessing author Kelly McDonald had the same underwater discovery, because she writes about “pilot fish” in her leadership book, “How to Work With and Lead People Not Like You.”

Turns out pilot fish are a type of jackfish that would hang around sea going vessels in the olden days. Sailors thought they would lead them to shore. In my case, they more accurately inspired me to lead the way to shore.

In any case, McDonald says leaders need to get to know the workplace pilot fish because they are highly influential. “They’re opinion leaders, the ones that others look up to. They are informal ‘leaders’ because others follow them and often confide in them. They might not even know they are pilot fish, but what they say or do influences others in their sphere,” she writes.

Here’s the deal about pilot fish in the workplace. They can be valuable thought leaders and may be able to clue leadership in about what others are thinking, not in a sneaky sort of way, but in a diversity-of-thought sort of way that may not be reflected at the highest levels of the organization where important decisions are made.

Here’s a great example McDonald offers in her book. Do you know about Skinnygirl? If you haven’t heard of it, perhaps check in with your female pilot fish. Skinnygirl is a brand created by entrepreneur extraordinaire and “The Real Housewives of New York City” star Bethany Frankel that produces low-calorie alcoholic drinks, including wine, vodkas, margaritas and ready-to-serve cocktails.

According to McDonald, Frankel pitched her idea to all the major liquor companies. “Every one of them dismissed her product. That turned out to be a bad decision. She forged ahead on her own, developed the brand, and sold more than 2 million bottles in her first year in business. Two years later, Beam, the makers of bourbon and other liquors, acquired the product and brand for an estimated $100 million! Skinnygirl sales continued to skyrocket: in its first year as a Beam product, Skinnygirl posted a whopping 486% in net sales growth.”

How did the major liquor companies miss this? McDonald says they were all run by men at the time. “I’m betting they passed on Skinnygirl because they didn’t see the need for it.” She calls this a “failure of perspective” and notes that diversity in the workplace does not only include things like skin color and sexual orientation, it also includes diversity of thought.

And that’s why top flight executives need to get to know their pilot fish, because even if they may seem like a fish out of water to the leadership team with their ideas, that diverse opinion may be floating around among the smaller fish and not reflected in the circle of big fish.

The lesson here, there could be a whopper of a business opportunity lurking in the shadows that a homogenous-in-thought leadership team might miss if it’s not paying attention to the pilot fish. Don’t let your Skinnygirl opportunity be the one that got away! FBN