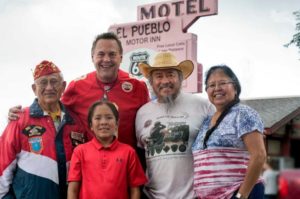 When Jacquie Kellogg of West USA Realty sold the recently demolished Wonderful Hotel, she had no idea that sale would stir her passion for historic buildings in Flagstaff. Soon after, the owner of El Pueblo Motor Inn called her to ask if she would serve as listing agent for the motel. It was then she learned of its historical relevance as the one of the oldest motels along Route 66.

“I’ve lived in Flagstaff for 23 years, drove by the El Pueblo Motel hundreds of times and never knew this was where the World War II Navajo Code Talkers gathered to develop a secret code,” says Kellogg. “The history is so fascinating. They developed this code and memorized every single word.”

During the war, its owner Philip Johnson recruited Navajo males to serve in the Marines as Code Talkers. Many of the Navajo lived at the motel before they were sent to the Pacific. Kellogg hopes to secure funding to buy the historic inn and donate it to a museum.

She admits she has no experience in this kind of endeavor, but has joined forces with Washington D.C.-based non-profit National Trust for Historic Preservation to gain support of House Bill 801, which would designate Route 66 as a National Historic Trail and add preservation value to the motel. The impetus is to promote, preserve, educate and invigorate economic development along the famed highway to the West, also known as the “Mother Road” and “America’s Main Street.”

“These historic gems are right in our backyard,” says Sharlene Fouser, owner of Jitters Lunchbox and board member of The Road Ahead Partnership, which aims to revitalize and sustain Route 66. “Flagstaff has more tangible original brick and mortar historic properties than most communities across the eight states that border Route 66. This is all part of American history.”

Both Kellogg and Fouser have generated support for the Preserve Route 66 campaign and awareness about the House Bill. Trailing along Route 66, champions of the effort made stops at historic sites.

“The trip began on July 2, at Grants Park in Chicago, and will end in Los Angeles on Aug. 3,” says Kellogg. “The group joined us in Flagstaff at El Pueblo for a photo shoot, entertainment and special guest Navajo Code Talker Thomas H. Begay.”

“It was a busy, but nice day. My kids and grandkids joined me,” says Begay, 94, who was born 18 miles south of Gallup, NM, in 1926. “I really appreciate the invitation and being able to be there.”

According to Begay’s biography, The Navajo Code Talkers developed and used a secret coded Navajo language for radio communication in the Marine Corps battle campaign. During the Battle of Iwo Jima, Private First Class Begay transmitted hundreds of secret messages over the radio network from February to March 1945. The Navajo Code Talkers were so effective that Japanese cryptographers were reportedly completely baffled and never able to break the code. He was 16 years old when he joined the Marines.

Nick Lowery, former NFL football player, motivational speaker and founder of the Nick Lowery Youth Foundation, attended the Preserve Route 66 stopover in Flagstaff. “It’s really exciting to recognize the birthplace of the Navajo Code and to put it on the map for the most famous highway in America.”

Lowery, nicknamed “Nick the Kick,” is a former placekicker for the New England Patriots, Kansas City Chiefs and New York Jets. He started The Nick Lowery Youth Foundation to help develop leadership skills in disadvantaged youth, especially Native American young people. Lowery, lives in Scottsdale and has a passion for American history. His father was a World War II pilot.

“I never knew the historical significance of the El Pueblo motel and I’ve been traveling past it for years,” said Clay McCauslin, co-owner of KAFF radio station. “Things could have been different in our world if the Navajo Code Talkers hadn’t met to develop that secret code.”

According to David Zimmerman, president of the Arizona Preservation Foundation, the top two reasons visitors come to Flagstaff are the Grand Canyon and Route 66. “Route 66 is like an endangered species and you’re trying to keep a few alive. When you lose historic motels, you deplete a bigger resource of history though town.”

Zimmerman notes that El Pueblo, built in 1937, is one the oldest Route 66 motels in the country. “It’s a nice example of an early motor court with separate buildings.”

“Route 66 is much more than just the actual roadbed, it’s the historic motels, gas stations and quirky roadside attractions that give it the ‘sense of place’ that so many visitors are seeking. We need to preserve the stock of Route 66 motels and other period buildings, businesses and their stories to keep Route 66 alive. Without them, it would just be another road,” he says.

“As part of our campaign to convince Congress to designate Route 66 as a National Historic Trail, we’ve created an online petition so members of the public can show their support,” says Amy Webb, senior field director with the National Trust for Historic Preservation in Denver.

Glamping: Communing with Nature in Comfort
Staying Competitive in IT