You are here: Home / Local News / Purina Community Jumps in to Help People, Pets During Floods 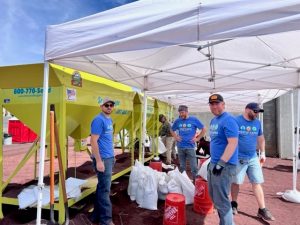 “In times of natural disaster all over the world, helping the community is part of the Purina culture,” said Leonhard.

As post-wildfire flooding devastated parts of the Flagstaff community during the summer monsoon season, volunteers from Nestlé Purina PetCare helped people and pets.

“In times of natural disaster all over the world – like we experienced with the Pipeline Fire and epic monsoon season – we strive to help by supporting our non-profit partners and team members,” said Purina Flagstaff Training Specialist Amanda Leonhard. “At our plant, we figured at least one in three factory members was impacted by the forest fire or the flooding that followed. We were focused on checking in on them and prioritizing their health and safety. It’s hard to come to work when you’re worried about your home.”

The local Purina manufacturing plant contributed $10,000 to the United Way of Northern Arizona to support the emergency efforts. It also sent pallets of pet food to the Coconino Humane Society and Kingsmark Kennels in Doney Park. In addition, Purina employees volunteered with the United Way to fill more than a thousand sandbags.

“In times of natural disaster all over the world, helping the community is part of the Purina culture,” said Leonhard. “I’m very proud of our people and how they came together during this crisis.”

During the pandemic, the local plant sent truckloads of pet food to help Navajo Nation families feed their animals when they were in crisis.

Purina has been part of the American story for more than 100 years. The iconic brand began as Ralston Purina Company in 1894. It started as a supplier of farm animal feed, moved into breakfast cereal production for people and then to petfood in 1926.

Purina has played a significant role in Flagstaff since 1975. The manufacturer employs more than 300 people and produces more than 300,000 tons of dry dog and cat food each year and has an annual impact of $54 million on the local economy. The company promotes the positive connection between people and pets and encourages dog-friendly workplaces, such as the offices of the Flagstaff plant.

For more information about the values behind the brand, watch the extended interview with Nestlé Purina Flagstaff Factory Manager Mike Ferritto on Zonie Living: Business, Adventure and Leadership at StarWorldwideNetworks.com. FBN