You are here: Home / Columnists / Seven Fun Facts about Flagstaff’s Role in the Olympics 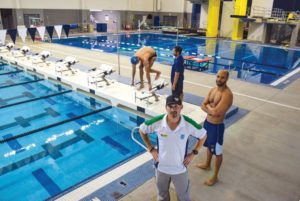 This summer, as we enjoy the excitement of the Olympics in Tokyo, pay close attention to an estimated 200 athletes chasing their dreams of a medal with a Flagstaff high-altitude training edge.

Flagstaff, Arizona is a world-class, athlete-tested destination, with locals often sharing the same trail, path or swimming pool with Olympians. Why? Flagstaff has a long history as an altitude training site, going back to when elite athletes discovered Flagstaff in the 1960s as they prepared for the altitude-based 1968 Olympics in Mexico City. Since the ‘60s and through the years, Flagstaff has proven itself to be one of the world’s leading altitude training sites, effectively ticking all the right boxes.

Fun Fact #1: Flagstaff is home to a “perfect” 6,889-ft. elevation (sport science research says the most effective altitude training occurs between 6,500-8,200 feet), at which the desired physiological adaptations and subsequent increases in aerobic and anaerobic performance are most likely to occur. Athletes gain an endurance edge at elevation in Flagstaff breathing deep, fresh, cool, mountain air, leading to better oxygen flow and muscle endurance. World-class athletes come from all over the globe to train in Flagstaff, and that includes athletes preparing for the XXXII Summer Olympic games in Tokyo, July 23-Aug. 8, 2021. In addition, Flagstaff’s location provides convenient access to lower training elevations, allowing athletes to modify their altitude training plans to take advantage of “hi-lo” training protocols.

Fun Fact #2: Flagstaff is home to high quality training venues on the campus of Northern Arizona University and high-quality sport performance services from Hypo2, not to mention a strong sport culture to boot. And, unlike many high-altitude training locales, all this is based within a fully functioning city, a vibrant mountain town environment where athletes can get away from the daily grind of training by enjoying great restaurants, grabbing coffee in unique local cafes, shopping downtown or taking in a show at the Orpheum. Combine all that with the ability to visit world-class destinations like the Grand Canyon and Sedona on rest days, and it is a truly exceptional package.

Fun Fact #3: Flagstaff was selected in the “Most Fitness-Friendly Places for 2021” according to smartasset.com. SmartAsset crunched the numbers and found that Flagstaff ranked in the Top 10 when compared to more than 300 metropolitan areas. Flagstaff had the third highest percentage of residents who walk or bike to work, with 109 fitness establishments per 10,000 total establishments.

Fun Fact #4: Since the 1996 Olympics in Atlanta, more than 10,000 world-class sport personnel (athletes, coaches, sport scientists, etc.) from 29 countries have made Flagstaff their altitude-training site of choice.

Fun Fact #5:  Ever wonder how Olympic athletes fuel their bodies? Athletes training in Flagstaff enlist the culinary expertise of professional chef Laura Chamberlain. Laura’s dishes meet the dietary needs of teams from all over the globe, with menus approved by coaches, keeping their bodies healthy and functioning at optimal performance levels. Some examples of meals prepared for teams include Japan’s Butano Kakuni, Italy’s Pasta Carbonara and Britain’s Burrito Bowls.

Fun Fact #6: Flagstaff’s elite athletes get results, as demonstrated at the 2016 Rio Olympics: 218 athletes, 39 medals, 30 countries; overall 84 Olympic and Paralympic medals. A great many of the world-class athletes who have trained in Flagstaff have snagged Olympic medals, won world championships and set world records. In swimming alone, athletes who did their altitude training in Flagstaff have won more than 200 Olympic and Paralympic medals over the last five Summer Olympic Games. Let’s see what Tokyo brings!

Fun Fact #7:  If Flagstaff were a country, and could lay claim to its athletes the way actual countries do in their tallying of medal counts, it could boast being a Top 10 nation over the course of the last five quadrennial cycles (the four-year summer Olympic cycle). There are more than 200 participating countries.

Let the games begin! This summer, as we enjoy the excitement of the Olympics in Tokyo, pay close attention to an estimated 200 athletes chasing their dreams of a medal with a Flagstaff high-altitude training edge. Learn more about the Flagstaff trained athletes selected to compete on teams from the Olympic trials at discoverflagstaff.com. FBN