You are here: Home / Business / Six ‘Universal Truths’ for Being Happier, Living Peacefully in the New Year 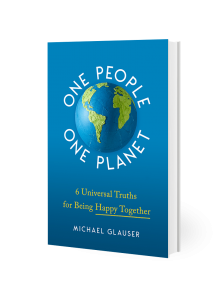 Salsa Queen (Maharba) Zapata was in the United States illegally, had no education, didn’t speak English and grew up thinking she had no value. As author Michael Glauser tells her story: “After two divorces and seven children, she was in a complete state of despair and could see no way out of it. Then she met a friend named Jim, an incredible mentor to her, who said, ‘Well, what do you like to do? What are you good at?’ She said, ‘I know food. I know salsas.’ So they started making salsas.”

Today, Zapata’s salsas are in more than a thousand grocery stores nationwide and she’s the largest manufacturer of salsas in the Inner Mountain West. “She’s happy, confident, believes in herself and now is earning money to help others who are in the same place that she was. She’s doing marvelous things that she had the capacity to do all along but she had to find someone who helped her and believed in her. She changed her life by changing her self-perceptions and by taking small steps for success.”

Fresh and impactful stories about how individuals have changed their lives – like the Salsa Queen, a career criminal, and a Holocaust survivor – are masterfully woven through Glauser’s book, “One People One Planet: 6 Universal Truths for Being Happy Together,” in which he lays out a path for how to increase happiness and live peacefully on the planet.

To find these “truths,” the Utah State University School of Business professor sifted through teachings of the world’s largest religions and greatest philosophers, and studied cutting-edge research in the field of positive psychology.

“I’ve been concerned about what I call two epidemics in our country. One is the epidemic of despair. Anxiety, depression, suicide, thoughts of suicide and other emotional conditions have increased in just about every age group for some reason over the last decade,” he says. “We’re also experiencing an epidemic of incivility – just a lot of judging and hatred – amongst various groups and political parties. I wanted to see if there were some proven principles that would lead to greater joy and happiness personally and lead to greater civility in our communities.”

Glauser began his quest by reading early manuscripts from the founders of the four largest religions: Christianity, Islam, Hinduism and Buddhism. He also studied the teachings of the world’s greatest philosophers. Here are the six common threads of wisdom he’s captured from people like Buddha, Jesus, Muhammad, Confucius, Socrates, Plato and Aristotle.

Give Up the Ego

“The way ego has been defined throughout history is it’s a composite of all of our self-perceptions. It’s everything that we believe about ourselves. The early Hindu and Buddhist writings say it’s a fabrication or an illusion. It’s been fed to us from parents and teachers and the media. So we grow up thinking we’re too tall or too short, too thick or too thin, or smart or not smart enough, athletic or not athletic enough – and these self-perceptions really limit what we do with our lives. So the first principle is to realize that these self-perceptions are fabricated. They are not really who we can become. We have tremendous potential as human beings and there is a way to overcome these and to grow into something different and better.”

“Confucius believed we should constantly work on improving our own lives,” writes Glauser. “He felt that examining the foibles of others before considering our own weaknesses is a sign of arrogance and not worth our time or effort.”

The book offers practical ways to squelch our biases and become more open to understanding our differences. “As we refrain from judging other people, wonderful changes occur in our lives.”

The Hindu sages called this Karma. “Jesus not only taught the importance of performing good deeds; he was a great example of doing them for his followers,” writes Glauser.

Confucius used the concept of “Ren” to mean that we are all connected and we impact each other. “Ren is this whole idea of contributing to a community daily like carrying somebody’s groceries or giving up a seat on a bus or shoveling someone’s snow in the winter,” he says. “The research is so clear that that dramatically reduces stress, anxiety and depression. It gives us a sense of self-worth and self-value.”

Forgiveness may well be the most thoroughly researched principle on the path to happiness and civility, writes Glauser. “Harboring grudges and refusing to forgive others results in anger, hurt feelings and embedded anxiety – and it’s these negative emotions that do the damage to our mind, body and relationships.”

“One People One Planet” describes forgiveness as such hard work that the Hindu sages called it “heroic.” Glauser says the Greek philosophers simply said holding a grudge and being vindictive “is beneath the dignity of magnanimous individuals.”

Glauser tells us that in the Islamic faith, Muhammad taught that everything we have in life is given to us by Allah; for Christians, everything comes from God. In essence, then, we are stewards of the things in our possession with a responsibility to manage them in a way that benefits the community.

Similarly, Glauser discusses the new “sharing economy” and the practice of sharing houses, rides and employees. “We’ve got to quit thinking about possessions and start thinking more about people and become people-oriented. We can’t all have everything, the world is growing too rapidly and we’re using up our resources. There are websites, formats and templates to share cars, houses, tools, toys, equipment and even personnel in organizations. The more that we develop this attitude of sharing, we just become part of a bigger community and that brings us a great deal of joy and happiness.”

Care for Our Needy

Aristotle, as noted in “One People One Planet,” believed caring for the poor made good political sense. “He felt that a strong middle class was the key to a well-functioning society,” Glauser says.

However, Glauser suggests that doing good deeds involves actively looking for opportunities to be kind and helpful. “If we all found one person to help lift up and it wasn’t just a one-time act – we’re going to be committed to coach, mentor and befriend this person – then we will see people go from where the Salsa Queen was when she was suicidal to where she is today and that benefits all of us and makes the society far better, far richer and much more enjoyable.”

Charting a Path to Peace and Happiness

For those who want to improve their state of mind and physical health, Glauser says these six truths have been proven to make a difference through 20 years of research.

“We all know these things, the question is are we doing them? My discovery is that most people don’t. We used to always think that success led to happiness, but now there’s so much evidence that happiness is the driver of success in our careers and in our organizations. Good leaders need to learn to manage happiness – their own and their team members’ happiness. As we become happier, we communicate more, we like people more, we make more friendships, we have more energy, we set more goals.” FBN

Michael Glauser is an entrepreneur and business consultant. He serves as executive director of the Center for Entrepreneurship in the Jon M. Huntsman School of Business at Utah State University. He’s also the director of the SEED self-sufficiency program, helping people around the world improve their standard of living and benefit their communities through entrepreneurship. His book, “One People One Planet: 6 Universal Truths for Being Happy Together,” is available on Amazon.

To watch the full interview with Michael Glauser, visit StarWorldwideNetworks.com/shows/Bonnie-Stevens