You are here: Home / Local News / Soulstice Publishing Makes Its Debut in a Love Letter 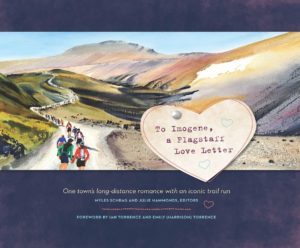 A collection of heartbreak and triumph, a grammatically correct scrapbook, a gallery of original watercolor paintings and a distance runner’s training guide, “To Imogene, a Flagstaff Love Letter,” is an artfully illustrated and emotionally fueled book of many books. It chronicles experiences from more than 70 local runners who have been called to the mountain pass that connects Ouray to Telluride, Colorado.

From astronomer Nat White’s “Amazing Grace” trombone solo on the abandoned mining road, to oncology nurse Chris Gomez’s second place finish carrying the race bib of a beloved Flagstaff runner, “To Imogene” is like chicken soup for the Flagstaff soul and a compilation of love letters from a long-distance romance. Through skinned knees, twisted ankles and tears shed summiting the 13,114-foot pass and decades of memories forged by Flagstaff runners, “To Imogene” is also the birth of Soulstice Publishing.

“What we realized in the course of producing the book, there’s a real desire and maybe a need for people to express their messages through books with soul,” said editor and distance runner Myles Schrag. “We don’t think we’ll be just a Flagstaff publisher by any means, but we found through this process that the Flagstaff community has powerful stories to tell.”

In the introduction, Schrag explains how “To Imogene” is about relationships. He writes, “This book was conceived in the days after the 2016 Imogene Pass Run. Later in these pages, you’ll hear more about Fon Cordasco, a woman I never met, and Chris Gomez, a man I have thankfully gotten to know better in the development of ‘To Imogene.’ They are the reason a vision for the book you now hold took shape. I am forever indebted to Fon and Chris for making it possible.”

Schrag put out the call for stories in 2017 and Julie Hammonds, former managing editor of Arizona Game and Fish Department’s Arizona Wildlife Views, enthusiastically answered. “Something inside me said, ‘I want to be a part of that.’ It was just this wonderful passion project and Myles said, ‘Sure, come on in!’”

Schrag and Hammonds had never met before, but soon became co-editors in the project and founders of Soulstice Publishing. “The big publishers have consolidated and some have gone away,” said Schrag, “but there’s been a flowering of small independent publishers filling a niche as a vibrant part of the community. Soulstice is a part of Flagstaff.”

Hammonds, who ran her first Imogene Pass Run (IPR) during the production of the book, recounts brainstorming sessions that inspired their creativity and resulted in interactive exercises included in “To Imogene,” like a “dress yourself” paper-doll-of-sorts page, note-taking space for “Mad Libs” and fill-in-the-blank stories.

“We realized this book could be anything. There was no model to go by,” she said. “The more fun we had, the more content we created.”

“I was inspired by the vulnerability of all the runners,” said Schrag. “Julie’s entry in the book describes someone doing it for the first time and the desire to be part of the Flagstaff running community. Nick Irvine’s passage reads like a Victorian love letter – it’s over-the-top, and also very sincere and loving. Kate McGree wrote a beautiful essay talking about her fear as an elite road racer taking on a trail race. People were digging deep in a way that expressed what the race meant to them. Flagstaff is familiar with those types of stories and this book was a way of collecting them.”

“I appreciate every single person, every runner brave enough to become an author, who contributed a piece of themselves to the book project,” said Hammonds.

“To Imogene” watercolor artist Linda Sherman also submitted a passage for the book. She set an IPR record in her age group and, at 75, holds the title as the oldest woman to finish the race.

“The rewards of accomplishing that run create memories to last a lifetime,” she wrote. “Why would anyone miss the pain and agony involved in the tortuous race? Because there are very few other places where a person can challenge themselves and feel the wonderful rush of feelings of accomplishment as they pass that final finish line. Yes, a feeling of pride in oneself is totally acceptable here. It can set a tone of determination for the rest of your life.”

“To Imogene” documents the self-imposed challenge, accepted and realized by Susie Garretson in the ’90s, to have Flagstaff show up with the largest contingent of runners. It also captures the fun and silliness that happens on the mountain, like when photographer Josh Biggs high-fived racers at the finish line in a fake-fur-shedding gorilla suit; and, the late-for-the-race decision of Melody Delmar to run in checkered Vans sneakers after forgetting her running shoes.

But be warned, “To Imogene” also holds lump-in-your-throat and cry-in-your-heart passages from runners like Dawn Begley, whose essay titled, “Best Race Ever,” recounts the race with her mother Pat Taylor, who wanted to commemorate her 70th birthday with another IPR run.

“As we approached Upper Camp Bird aid station, Mom began struggling and doubting her ability to finish the race. This was unlike my mother, as she finished everything she started and Imogene, while a huge challenge, was not going to be different. ‘Hurry!’ the man running the cutoff ahead yelled. ‘She has three minutes!’

Begley describes how the man ran down the trail, grabbed her mother by the hand and pulled her across the cutoff line. She continues to share the agonizing effort required to reach the summit. “Mom had stopped talking and was holding onto the top of my CamelBak with both hands, head bobbing between her arms, one foot moving at a time. It took every ounce of mental and physical strength I had to pull her step by step to the Pass.”

Begley explains that that year, she and her mom finished second-to-last. “We found Annette Avery and Maureen Meyer, the wife and sister of [late neurosurgeon] Nate Avery, standing in front of the buses. Mom hugged them and told them that Nate was there with her. In return, they informed us that Mom had won a medal! Second in her age group! Two weeks later, Mom was diagnosed with glioblastoma, a terminal brain cancer. She died the following July.”

In the 2013 IPR, Pat Taylor’s ashes were carried by Sean Hickey and Michelle Wesson to Imogene Pass. That same year, long-time IPR participant Fon Cordasco was diagnosed with cancer. For the next three years, as she underwent treatments to battle the disease, a “Fon-tourage” of friends and family would join her at Imogene.

As noted in the book, Cordasco had encouraged many athletes to participate at Imogene. One such gifted runner was her oncology nurse, Chris Gomez. He ran his first IPR in 2015 and planned to meet Cordasco at the starting line in 2016.

“She was a constant exhibition of gratitude and grace in what can be a very dark place,” Gomez wrote. “Beyond her treatments, she gave me so much insight into life, running, love, friends and everything in between. She likened Imogene to a re-set, a new year for her: the ‘Imogene New Year.’”

Two months before what would have been her 21st consecutive Imogene Pass Run, Cordasco died. Her husband, Billy Cordasco, asked Gomez to carry her race bib to the finish line.

Schrag writes, “Gomez put the exclamation point on an already emotional day when he raised Fon’s bib for all to see as he rolled into Telluride with a second-place finish.”

Gomez recounted, “…something intensely compelled me to carry Fon just one step ahead of me.”

Schrag started the book on a hunch that Flagstaff had emotional and powerful stories to tell. “That turned out to be true,” he says. FBN

“To Imogene, a Flagstaff Love Letter,” is available at Bright Side Bookshop on North San Francisco Street and at soulsticepublishing.com. A portion of book sales is being donated by Soulstice Publishing to the BLE Foundation (bleflagstaff.org).

A holiday book signing is being offered from 2 – 5 p.m., Saturday, Dec. 7, at the home of Bill and Lisa Ring, 220 W. Birch (across the street from Wheeler Park) in historic downtown Flagstaff.