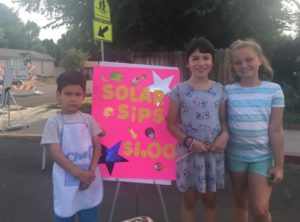 If location, location, location applies to lemonade stand success, best friends Ellia Williams, age nine, Lexi Arias, age eight, and little brother Evan Arias, age six, may well be the smartest and youngest entrepreneurs in the path of totality. Their pop-up street-side business, Solar Sips, no doubt brought in enough revenue the day before the total solar eclipse for them to achieve their financial goals: Ellia plans to use the money for a Hoverboard; Lexi wants an eclipse t-shirt; and Evan will be investing in an apple tree.

“We charge $1 for a Costco-size cup of pink lemonade,” said Lexi, “but most people give us more.”

“We’ve made about $150 so far,” said Ellia, who acknowledged that cuteness sells. “The BBC was just here.”

Solar Sips was located about a block from ground zero, Madras High School, where Flagstaff astronomers set up solar telescopes and two days of free public education presentations with the Lowell Observatory Eclipse Experience. The Oregon town of 6,200 people was expected to be one of the best places to catch the first views of the rare cosmic event on Monday, Aug. 21, as the moon crossed in front of the sun and darkened a 71-mile-wide diagonal stretch from Oregon to South Carolina.

In the center of Madras, many more small businesses were profiting from the influx of visitors, expected to be more than 100,000. NASA-approved solar eclipse sun glasses were sold from the back of vans; a microbrewery poured Apocalypse IPA, and Dairy Queen franchise owner Frances Millard pulled ice cream out of the refrigerated trailer she rented to store the extra 360 gallons ordered in anticipation of Blizzard-loving crowds.

“We took some of the items off the menu like the Fudge Stuffed Cookie because they take a lot of time to make,” said Millard. “Most all the visitors were super nice. No one seemed to get upset that they had to wait in line.”

Thomas and Leora Strong were capitalizing on the world’s fascination with the eclipse and the local love for Sasquatch. The two printed up nearly 600 t-shirts with Leora’s design that combined both of these rarely seen phenomena. “Everyone on the [nearby] Warm Springs Reservation has a story about Bigfoot,” she said. “Either they’ve experienced Bigfoot sightings or they know where the cave is.”

Less than 24 hours before the eclipse, Thomas reported they had sold more than half of the t-shirts at $25 each. Leora was also selling her unique jewelry creations. They were counting on the astronomical activity to help put her through nursing school. “Nothing like this has ever happened in Madras before,” said Thomas.

City of Madras administrator and Human Resources Director Sara Puddy agreed. “The eclipse put Madras on the map. Our goal was to get people here and back home safely and we pulled it off. We did it well! There has just been this outpouring of gratitude to our elected officials for a job well done. That never happens!”

Hotels were full. Some, like the Inn At Cross Keys Station, were booked years in advance. And restaurants were slammed. The Great Earth Café and Market did a month’s worth of business in two days. Co-owner Gary Boyd said the benefits extended far beyond the cash register. “More than that is what the eclipse did for the community and the staff. It was fun!”

Madras Chamber of Commerce Executive Director Joe Krenowicz said the town started planning for the celestial impact about two years ago with Lowell Observatory. “Having Lowell’s presence and the ability to say, ‘Madras is scientifically important and nationally recognized as the place where astronomers are and where you should be as well,’ really says something.”

The planning initiative included more than 75 businesses and organizations. Krenowicz estimates the economic impact at $5 million across a 10-day period.

Although the moon and eclipse chasers have moved on, Krenowicz says the Lowell Experience will have a lasting effect on the community. “We’ll see a lot of kids with an interest in science because of what Lowell brought here. We all benefited from it.” FBN