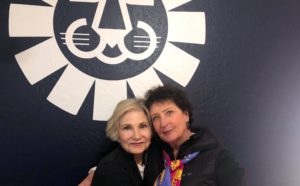 Freddi Paulsrud and Rosemary “Rosie” Lamberson are not naïve like Rose Nylund, intimidating like Dorothy Zbornak, or self-absorbed like Blanche Devereaux, but they are every bit as charismatic as “The Golden Girls” of 1980s television, with a real-life friendship, respect and love for one another.

Rosie and Freddi are realtors with Russ Lyon Sotheby’s International Realty. Freddi also is an associate broker. The two of them have a combined 80 years of real estate experience in the Flagstaff market and are at the top of their game, but that is not what keeps them in the business or in town. Like two best friends who get to work and play together, “The Golden Girls of Real Estate” feel privileged to do what they do.

Not only have they watched the town and its families grow, they’ve been a big part of it. Their lives have been so much about the neighborhoods, the houses and the people – the births, the deaths, the moves – that they are as much historians as they are realtors. Both came to Flagstaff without knowing what to expect. What they found was a beautiful place to live, a lovely environment to raise their families, successful and interesting careers, and each other.

“I came to Flagstaff not knowing there were even mountains in Arizona!” said Freddi, who enrolled at Northern Arizona University in 1972 to be a teacher. While earning her degree in education with a minor in psychology, she worked as a bartender at Arizona Snowbowl. That is where she met her husband, ski school director Jeff Paulsrud. The couple raised two children, Jessica and Brett, in Flagstaff.

Rosie also moved to Flagstaff without ever having been here. She and her husband, Mark, heard Arizona’s mountain town could use an outdoor sports shop. Since they had been successful with their business, Mountain Sports, in Casper, Wyoming, they packed up their household with children, Bret and Lisa, and made the move in 1981.

“I was too busy keeping up with two little ones to do any research,” she said. “I just knew wherever we were as a family unit would be fine. Never would I have dreamed it would be the best fit for every reason to reside and raise our family here. Sometimes, one just gets lucky in life!”

Rosie got involved as a docent right away at the Museum of Northern Arizona. “That was a wonderful cultural introduction to town.” Meanwhile, Freddi was building her real estate career. The two met in the Lambersons’ Mountain Sports Flagstaff. Shortly thereafter, Rosie mentioned she might be interested in real estate. Without hesitation, Freddi found her a desk and the two have been motivating each other ever since.

“You’re such a good teacher,” Rosie told Freddi over the conference room table in Freddi’s Russ Lyon Sotheby’s Humphreys Street office. “You do so well in front of a group of people. You are so poised and optimistic.”

Even so, Freddi chose to be a realtor instead because of a less-than-impressive experience with an agent when she and Jeff bought their first home. “My realtor was a friend. He was terrible. I thought, ‘People shouldn’t be treated that way.’”

Freddi describes Rosie as “a Jewish mother” who wasn’t raised in a Jewish family. “She leads with her heart. She understands the feeling of ‘home.’”

“It’s not really business for me,” said Rosie. “It’s a way of life. I know how I feel in my home and I’ll bring everyone home for Thanksgiving after showing houses, if they don’t have anywhere to go.”

“One of the best moves was when I picked my next-door neighbor, whom I love. I feel like we’re family,” said Freddi. “And now, you don’t want to move!” added Rosie.

Rosie recalls cleaning out a dear friend’s house to get it ready to sell. “Karen had a long bout with a debilitating illness. It was really hard. I had some of the loveliest moments with her as a friend. It was hard to say goodbye.”

“Rose got us all together to garage sale her [Karen’s] house before it sold,” recalled Freddi. “Karen wanted us there, but it was so chaotic and difficult for her.”

Through their many transactions, real estate for both women is an extension of family and kindness. And they both say the most joyful part of the job is helping first-time homeowners. “They’re babes in the woods. They trust us to help guide them with their decisions,” said Rosie. “Sometimes, we’re chosen for that reason. It’s quite the compliment.”

“My greatest joy is making home ownership a reality for the young couples who were just toddlers themselves when I helped their parents buy their first home in Flagstaff,” said Freddi. “Someone buying a first house is eternally grateful.”

Rosie and Freddi each have a son and daughter. Their sons, Bret and Brett, were close growing up. “They were always Big Bret and Little Brett, noted by their height and their age,” said Freddi. “In 2005, both of our sons followed us into real estate at Russ Lyon. The best years in my real estate career were when I was working with my son alongside Rose and Big Bret in the same office. Now, Big Bret continues as our managing broker and Little Brett is the chief real estate analyst for a large investment company in Boston.”

Freddi’s daughter, Jessica, is an art teacher at a private school in Los Angeles.

Rosie’s daughter, Lisa, has taken on the family business as owner of Mountain Sports Flagstaff on the corner of Aspen Ave. and San Francisco St. “I dragged my kids around for so many years in real estate,” said Rosie. “Lisa was always left on the Sechrist School steps as the last child waiting to be picked up. I would seem to always get a call about real estate as I was on my way to get her.”

The Golden Girls of Real Estate have received many professional accolades. Both have been in the top 1% of the company for sales several times. Recently, Freddi was honored with the Russ Lyon Sotheby’s Elite Award for sales and listings.

But, despite business success, Freddi considers being a cancer survivor her greatest achievement. At age 38, she had a bilateral mastectomy. She was diagnosed a month before her younger sister died of ovarian cancer. Her mother died of cancer when she was 39. Today, Freddi is the only female in her immediate family to survive the disease.

She used her experience to produce an award-winning video, “The Survivors Symphony,” and supports other survivors through motivational speaking, as well as volunteering with the American Cancer Society. “Being a survivor is moving forward instead of dwelling on the past,” she said. “I’ve always been a big proponent of that. I’ve lost many family members to cancer and really feel so lucky to be here all these years.”

The two friends share a teary moment as Freddi recounts her personal story. “It takes a long time to grow an old friend,” said Rosie.

“I thank you,” said Freddi to Rosie, “I feel so lucky to have you as a professional and as a friend that I can call at any moment.” FBN

Join Freddi Paulsrud and Rosie Lamberson as The Golden Girls of Real Estate share their insights and expertise each month. Read on as they debut their Golden Girls column on  page 32.

Understanding the Value of Being Counted
Exploring Cohousing in Flagstaff