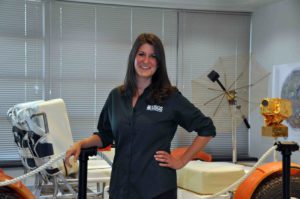 The searing flash of flames, the ground-shaking vibration, the deafening roar of engines – witnessing a space shuttle launch from Cape Canaveral, Florida, is not something easily forgotten by most, but for Lauren Edgar, it was life altering.

The then-second grader, who came to visit her grandmother in Florida, left her vacation with more than warmth in her heart. Little Lauren’s imagination was on fire. “That moment was pretty significant for me – the realization that there were people on board and they were leaving this planet.”

She began to wonder what else was out there, and thus began her own countdown to a career in space exploration.

Edgar went off to Dartmouth College, intending to become an engineer. However, after a research internship looking at meteorites, she discovered her love for geology. Throughout college she was involved in a variety of space-related projects, including a few reduced-gravity flights on NASA’s C-9, also known as “the vomit comet,” a nano-satellite project and two internships at NASA’s Goddard Space Flight Center.

After college, she went to graduate school at CalTech, where she earned her master’s and doctorate degrees in geology. Through her graduate school research, Edgar first got involved in the Mars Exploration Rover mission, helping with both operations and the analysis of spacecraft data. Weeks after she defended her thesis, the Mars Science Laboratory Curiosity rover landed on Mars, and Lauren has been working on that mission ever since. Prior to coming to Flagstaff, she was a post-doctoral fellow in the School of Earth and Space Exploration at Arizona State University.

“The current astronaut class of six women and seven men is made up of test pilots, doctors and Navy SEALs. Some have a background in physical science, but most are not geologists. If we have their boots on the ground on the Moon or Mars, we want to make sure they know what to look for,” she said. “We also want advocates for geology so they can assist in spacesuit design and say, ‘Hey, I need a suit with mobility so I can bend down and pick up rocks!’”

The candidates, 11 Americans and two Canadians ages 31 to 42, were chosen out of 18,000 applicants. By comparison, Apollo 16 astronaut Charlie Duke recalls there were 19 chosen when he applied from a field of 3,500.

“One thing that’s very different about this current class compared to the culture of the ‘60s is they are very collaborative. They were selected for their soft skills. They are competitive, yes, but are a lot more about team-building and interacting in groups. In the ‘60s, you were chosen because you were the best pilot in the room.”

Soon, Edgar and the astronauts in training will be retracing the steps of the Apollo Mission space pioneers in some of the very same sites around Flagstaff, including some areas on Babbitt Ranches.

“Flagstaff has access to a number of fantastic planetary analogues that are so good for understanding the surface of the Moon or Mars,” she said. “We have one of the best-preserved impact craters [Meteor Crater], the San Francisco Volcanic Field, Sunset Crater, SP Crater and access to the Grand Canyon. We can teach all those principles of reconstructing the geological history in close proximity to town.”

Edgar and others will be training them to use field tools like hand lenses, rock hammers and GPS trackers so that they can analyze rocks in the field, generate a geologic map, prioritize unique samples, determine the sequence of events in geologic history and document what they find.

“One of the big questions about the Moon is the abundance of water ice that might be available for future human space exploration,” she said. “We may be able to convert it into fuel and not have to carry it with us.”

Since the Trump administration announced in March that humans will walk on the Moon again before the end of 2024, Edgar says NASA has ramped up its plans. Spacecraft development for the Artemis Program [Artemis is the twin sister of Apollo in Greek mythology] is underway. It includes the Gateway, a lunar orbiting outpost, and Orion, a crew exploration vehicle.

“The Moon can help us answer so many questions,” said Edgar. “We want to know how tectonically and volcanically active it was. We have questions about the formation and evolution of the Moon and the Solar System, the bombardment of meteor collisions and how life got started on Earth.”

While she ponders these questions, Edgar is fully aware that she and Flagstaff could well be on the way to making history by cultivating the first female astronaut to visit the Moon or Mars.

“It’s a huge thrill. I love my job. I’m a little bit jealous of the generation that sent the Apollo astronauts to the Moon and experienced the greatest achievement in human history. It would have been exciting to be part of that!”

Who is your role model?

“When I was in middle school, I had the opportunity to connect with Apollo 17 Commander Eugene Cernan. I interviewed him for a job shadow project and kept in touch through some letters over the years.One of my favorite quotes from him was, ‘Somewhere on Earth today is the young girl or boy, the possessor of indomitable will and courage, who will lift that dubious honor from me and take us back out there where we belong.’ He certainly knew how to inspire the next generation to follow in his footsteps, and I’m proud to be working toward that legacy.”

“I love the quote from Carl Sagan, “Somewhere, something incredible is waiting to be known,” because it really inspires me in all parts of my life.It fosters that culture of exploration that I embrace in my professional and personal activities.”

What do you like to do when you’re not working?

“I love running and hiking and camping – the joys of living in Flagstaff! And I also travel quite a bit.”

Where do you see yourself five years from now?

“I would love to say that in five years I’ll be helping to support the next generation of astronauts in their return to the surface of the Moon!I’m also excited about a number of upcoming Mars missions.”

What book do you recommend to others?

“Given all my work with the Mars rovers, I would say, ‘The Martian,’ by Andy Weir.The author did such a great job researching every aspect of the book, with just a few improbable events thrown in for drama, and it’s based in scientific reality.The movie was very entertaining as well.” FBN

To hear more from Lauren Edgar and her role in training the next space pioneers, listen to On the Grid, a podcast sponsored by FBN and KAFF Radio at FlagstaffBusinessNews.com.