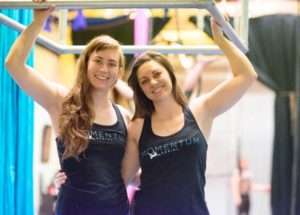 Joanie Garcia and Morgan Louvier have more 25 years combined training in static trapeze, dance, lyras and hoops. Louvier’s career began in Gilbert, where she trained on a flying trapeze. She says her focus is on “appropriate skill progressions, body awareness and body health.” She prides herself in her passion and loves to help others find “freedom in the air.”

“Opening Momentum Aerial with Joanie was the best decision I’ve ever made,” said Louvier. “Joanie and I work so well together; we’re both very organized, and we’re always on the same page. Joanie’s experience and strengths lie in front-of-house management, while mine are in back-of-house management. Our strengths combine together, we make a great team, and have made Momentum a welcoming home for people to build strength, confidence and have fun in the air.”

Garcia says she likes to refer to aerial dance as “spart” – part sport and part art. “It incorporates several different elements, gymnastics, dance…etc.” Garcia, who originally trained in jazz and modern dance, grew up dancing and has always been fascinated by it. She co-founded the Crested Butte Dance Collective where she developed one of the only aerial training programs in Southwest Colorado. “I’m also trained in Physically Integrative Dance and Dance for Parkinson’s.”

The benefits of aerial dancing “are not just for women,” said Garcia. “We have students as young as four to five years old and some in their 70s.” Garcia also pointed out that aerial dancing is low impact and gentle. “We also work with people with sensory processing disorders (SPD). The wrapping and spinning is very grounding and regulating and helps develop proprioception.”

Along with instructing at Momentum Aerial studio, Garcia is a director of Dark Sky Aerial, an award-winning ambulatory aerial theatre company where aerial dancers soar alongside structures such as hotels, building walls and rooftops.

Jessica Young, whose daughter, Aspen, has trained on the lyra and silks for almost two years, said, “It [aerial dancing] brings tears to my eyes watching my daughter perform. It’s so beautiful and she loves it so much and has become so much stronger through learning aerial arts.”

“I love dancing high in the air,” said 11-year-old Aspen Young. “Aerial dancing has helped me with my core strength and mountain biking. It’s so cool because you are exercising while having fun.”

Sisters Maggie and Mia Veale, 12 and 11, love aerial dancing, “I like Miss Joanie because she makes you feel like you are the only one she’s paying attention to in that moment. She taught me how to dance on a lyra and I didn’t think I’d be able to do that well because I don’t have a lot of upper body strength, but she’s really good about teaching us safely and efficiency,” said Maggie.

Mia says she gets excited when she gets to do the lyra because she enjoys swinging around in the hoop. “Miss Joanie is an amazing teacher. She helps us out and she protects us. She’s the best.”

“I have never heard of aerial dance before the Spring 2018 Showcase. My daughter was invited by a friend so we attended,” JJ Veale said. “I was shocked at the beauty of the art form and how graceful the kids were. They are working their whole bodies in a healthy way, safely and gently, while also learning how to be attentive to music and rhythm. Miss Joanie has shown remarkable patience, unbelievable skill and willingness to meet each student at their skill level.” All four of Veale’s children are enrolled at Momentum Aerial. FBN

The Momentum Aerial studio is located at 1802 West Kaibab.

With more than ten years of experience as a trapeze artist, Louvier enjoys helping find freedom in the air.