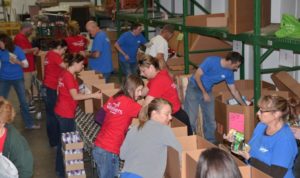 When W. L. Gore & Associates, Inc. (Gore) established roots in Flagstaff in 1967, the location could best be described as a small, wonderfully scenic mountain town. Separated from other communities by canyons, peaks and ponderosa pine forests, its population at the time was roughly 20,000, and despite its natural beauty, big businesses were not competing for space. So, what made Flagstaff a prime location for growing Gore’s business?

It is a topic Bob Gore touches on in his book, The Early Days of W. L. Gore & Associates, sharing his parents and company founders – Bill and Vieve Gore’s – enthusiasm for the picturesque location:

“One could wonder why any manufacturing operation would be set up in 1967 in Flagstaff, Arizona, so far away from customers, sources of raw materials and our eastern support. Only Bill Gore could give enthusiastic reasons for such a remote location. For example, it was on Rt. 66, connecting east to west. The railroad went through Flagstaff directly to Los Angeles, ‘just an overnight trip,’ he said. The small airport in Flagstaff ‘will surely expand.’ Perhaps more importantly in his mind was his and Vieve’s own western heritage: ‘There are beautiful ponderosa pine forests, white-capped mountains, and it is small enough to be a great place to raise a family.’”

Fifty years later, there is no questioning those instincts, as Flagstaff is now home to roughly 2,000 associates across 11 plants, making up Gore’s thriving Medical Products Division headquarters. Throughout this year, the global science company is commemorating its golden anniversary, reflecting on Gore’s rich history in Flagstaff and promising future.

“It is the talent, creativity and commitment of the associates that have propelled us to our world-class standing,” divisional leader David Abeyta said when kicking off the milestone year.

Gore opened its first plant in Flagstaff in 1967 to manufacture electronic products for the computer and aerospace industries. In the 1970s, the focus shifted to the medical industry, with Gore’s first medical product, a vascular graft that entered the market in1975. Since then, Flagstaff has been the birthplace of advanced treatment options for a variety of complex medical conditions, including heart defects, aortic aneurysms and peripheral artery disease, among others. And the location remains the home base of Gore’s global Medical Products Division.

For associates like Barb Magnan, who operates out of the Elden View plant, it is all a point of pride. “I’m so thankful that Bill and Vieve Gore made the decision to expand into Flagstaff 50 years ago,” she said. “It’s given me the opportunity to raise my family in a small-town atmosphere while being part of a global company that makes products that improve lives and solve problems for people around the world every day. I have such a strong sense of pride and satisfaction being part of this greater good and doing so from the place where my children grew up.”

While Flagstaff has largely retained its small-town feel, the location has graduated to city status with around 70,000 residents now calling it home. Gore is the city’s largest private employer and a significant presence in the community, with donations in Flagstaff and associates’ volunteer time accounting for an estimated $600,000 and 50,000 hours contributed to non-profit organizations annually.

“On a larger scale, we’ve made it possible for doctors around the world to implant more than 40 million life-improving devices,” Abeyta added. “We are proud of our impact on lives and in our community.”

Gore is planning 50th anniversary public activities to coincide with the September Flagstaff Festival of Science. Learn more about the products and lives that have been saved at goremedical.com. FBN