You are here: Home / Local News / Warehouse of Dreams 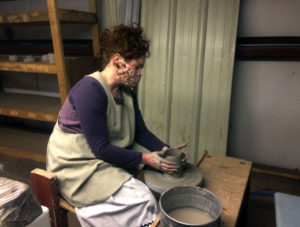 It is hard to stop a good idea, even with obstacles such as months of coronavirus fears, a flagging economy and a wayward car in December that smashed into the corner of the warehouse that houses The Flagstaff Makerspace Coco-op on West Kaibab Lane.

Opening in July of last year, the co-operative venture honors the makerspace ideal: Enter with an idea, learn to make it, make knowledgeable and curious friends.

In recent years, makerspaces have cropped up across the country to provide places where people with shared interests can gather to work on projects while exchanging ideas, equipment and knowledge.

Graham Campbell, an outdoor adventure guide from Knoxville, Tennessee, moved to Flagstaff in 2019 and found work as a mountain biking, hiking and canyoneering guide.

Long interested in different trades and tinkering with projects, he also brought with him a dream of starting a makerspace for adults, choosing Flagstaff as a fertile ground for innovation and invention.

“Outdoor guiding is seasonal almost everywhere, so most guides have to completely uproot every four to six months to chase work, often in another state,” he said. “I had been seeking to put down roots and invest energy into a permanent community.”

“Alice has become a wonderful friend and a super-helpful, giving resource,” he recalled. “I could tell that she had built a resource oriented around the same ethos that inspires makerspaces. The primary difference is that Tynkertopia serves school-aged youth. We saw that adults in Flagstaff had no such resource.”

The new non-profit exists to help local adults get their “creative side on,” he said, and to “interconnect locals of deep talent and expertise, and to foster the creation of new startups, products, and teams. In doing so, we hope to electrify Flagstaff’s economy.”

He asked Christie, who is also a professor emeritus at Arizona State University, if she could help him find someone else who might be interested in creating a new makerspace.

She gave him contact information for Ward Davis, a retired chemical engineer who was also passionate about recycling and refurbishing items that others throw away.

Although more than 40 years apart in age, the two men found much in common when they met for coffee and began brainstorming a path for an adult makerspace.

The two men started asking around and posting online to find other people who wanted such a space in town.

The response was overwhelming, including from local entrepreneur Jay Wellman, who offered his facility at OVRLND, a company that makes custom pop-up camper tops, to host the first planning meeting.

After that vibrant brainstorming session with a dozen attendees, the group of people who would become Coco-op began to assemble weekly in the pews at Cornish Pasty to plan and discuss options.

Quickly stepping up to make the ideal concrete were early members Tina LaChance, Thorsten Frömming, Phil Scandura and Mark Byrnes, who became directors on the board of the new non-profit.

For their new endeavor, they coined the name Coco-op, a blending of Coconino and co-op.

The growing team began the hunt for an affordable warehouse space in the areas of town zoned for light industrial.

After an exhaustive search, Coco-op member and woodworking hobbyist Rebecca Crawford spotted an opportunity in a warehouse for rent in west Flagstaff.

At 5,000 square feet, the warehouse was spacious enough to actualize their dream of creating a community-oriented workspace powered by a team of individuals who come together to donate equipment, money and time.

The timing was perfect, as Blackpoint, formerly Teledigit Corp, a telephone equipment and systems business, would soon vacate the warehouse when its lease ended.

Today, the creative space houses a myriad of equipment for welding, sewing, woodworking, sawing, pottery making, painting and drawing, textile and leatherworking, 3-D printing, as well as a computer lab and classroom. A garage door can open to provide space for troubleshooting vehicle problems.

“A big reason we exist is to grow our members’ sense of self-efficacy and self-esteem,” Campbell noted. “We strive to foster their locus of control, a term in psychology referring to the degree to which people believe that they, as opposed to external forces, have control over the outcome of events in their lives.”

An example of locus of control would be “learning how automobile electrical systems work, and then knowing what to do when your car breaks down as a result,” he explained.

Central to the success of the non-profit are monthly memberships of $50 for individuals, $75 for families, as well as $25 memberships and scholarships available for students and those with lower incomes.

Memberships include 24-hour access to the use of the space, equipment and attendance in classes offered by Coco-op experts.

Ariel “Ari” Coffey became a member in February 2020, just as the search for a location was underway, and has “been supportive all throughout,” Campbell said.

Currently, she is the acting shop captain for the growing clay studio.

“The Coco makerspace is a wonderful place for collaboration and fosters creative energy,” Coffey said. “The space is welcoming and allows individuals to work on projects or explore new means of creativity and different equipment. The clay studio is growing and continues to welcome new members, allowing the community a safe, open environment for exploration.”

To keep the dream running, many members have donated equipment to the space that has been retrieved out of garages, basements and storage units, where they were gathering dust.

“We have grown steadily from 12 or so dues-paying members on opening day in July, to 36 members actively paying dues this month,” Campbell said. “We seem to be accelerating and have started to benefit tremendously from word-of-mouth.”

Campbell said they are anticipating increased operating costs through the winter, when increased heating is necessary.

A potential setback event for the co-op occurred on Sunday, Dec. 27, when a driver on Kaibab Lane crashed his vehicle into the northwest corner of the building. The driver was taken to the hospital and sustained no serious injuries, and no Coco-op members were injured.

“The car accident damage is at most just a temporary inconvenience,” Campbell said in early January. “It affected a part of the building we haven’t yet been using much, and the structural integrity is intact such that the building remains safe to occupy. The building remains a wonderful facility to effectuate our mission.”

The mood at the co-op has been optimistic and members have continued to use the space as before.

Organizers at the co-op have been working with insurance companies, builders and utility providers to get the facility operating at full capacity as soon as possible.

“If anything, the building damage has brought us [closer] together, with members volunteering time and effort to clean up the debris and such,” Campbell said. “Aside from this accident, Coco-op continues growing tremendously. We’re so grateful to the Flagstaff community for your involvement!”

Coco-op is accepting donations of equipment and tools, as well as offering upcoming classes. To donate, sign up, become a member or to learn more, visit cocoop.org. FBN