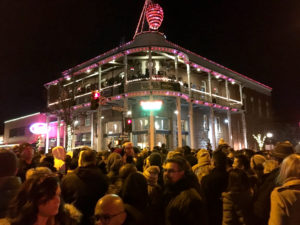 The Weatherford Hotel’s Great Pinecone Drop turns 21 this year. After two decades of New Year’s Eve revelry, the Great Pinecone Drop has secured its place in history as an important mountain town tradition and winter tourist attraction. This New Year’s Eve, Tuesday, Dec. 31, thousands of residents and visitors are expected to gather again as they pour into the streets of historic downtown Flagstaff to cheer on Northern Arizona’s celebrated symbol of hope and renewal.

“Each year, the Great Pinecone Drop brings us such joy as we are able to share the treasure of the historic Weatherford Hotel, honor the past and create new, wonderful memories as a community,” said Weatherford Hotel owner Henry Taylor.

In 1999, Weatherford Hotel owners Henry Taylor and Sam Green Taylor began brainstorming with hotel staff members about a unique way for Flagstaff to ring in the new millennium. Weary and punchy from the idea-generating meeting, they envisioned dropping a giant pinecone from the top of the historic three-story Victorian building. They all had a good laugh. And then, Henry thought, “You know, that could work.”

So, it was off to the basement of their century-old hotel, which at the time was the Taylor’s workshop. Amidst antique dressers and other Arizona Territory relics like a massive mahogany bar, antiquated medicine bottles and volcanic rock metates used by early Native Americans to grind corn, Sam spied a 30-gallon aluminum garbage can. Echoing Henry’s thoughts from earlier, she said, “That could work.”

Sam got busy with a glue gun, several strings of lights and many, many actual pinecones from the surrounding ponderosa pine forest. Oversized and stylized, the crafty cone was coming together, but City of Flagstaff officials determined it needed to weigh at least 70 pounds to keep it from swaying in the breeze as it dangled from the Weatherford’s decorative cupola 30 feet above the streets.

That was when bags of sand became part of the design. The result, at six-feet tall and four-feet wide, became known as the Official Millennium Pinecone. The enormous creation was a local hit. Its popularity grew as it began making appearances. In the town’s holiday parade on Dec. 11, 1999, the Millennium Pinecone was presented to the community by Mrs. Claus, Rudolph, Santa’s elves and an adorable dancing team of Santarinas. Not only did the pinecone take the spotlight, the Weatherford Hotel parade entry won the Chamber of Commerce award for Best Costumes.

Following the event, a three-man team carried the heavy and awkward cone to the top of the hotel, where a special hoist and reinforcement was needed to hold it in place as it hung like a giant homemade ornament through the holiday season.

Sprucing up the Pinecone

By 2004, Henry and Sam understood that the Great Pinecone would not be going away. It was a celebratory crowd pleaser and people were coming from near and far for this twinkling spectacle every holiday season. However, Sam was tired of cringing every time news reporters asked her about it. “I hated to admit it was made out of a garbage can.”

She decided it was time to invest in a work of art. She approached a local welding company to create a giant aluminum pinecone.

The iconic Great Pinecone continues to steal the show as the holiday centerpiece in Flagstaff each year and often is shared with national audiences as news teams spotlight celebrations from coast to coast. LED lights make for a dazzling display and fireworks from nearby buildings punctuate the significance and anticipation of the New Year.

This year, the Taylors invite everyone out again for the biggest night of the year in Flagstaff’s historic district. There will be two lowerings from atop the Weatherford Hotel on Aspen Ave. and Leroux St.: one at 10 p.m., to accommodate families with young children and to coincide with East Coast celebrations; and one at midnight.

Both events are free and will include music and sing-alongs, an inspirational message from Flagstaff community leaders and a massive countdown led by a local personality as thousands of cheering Great Pinecone Drop fans fill the blocked-off streets to usher in 2020.

The Weatherford Hotel is offering limited seating for the semi-formal/formal VIP Golden Ticket Event from 8 p.m. to 1 a.m. in the Zane Grey Ballroom, which includes balcony viewing of the Great Pinecone Drop, appetizers, a buffet and prime rib carving station, drink tickets and a champagne toast.

Live music will be offered on all floors of the hotel until 2 a.m. New Year’s Day. All are encouraged to prepare for cold winter temperatures and possibly snow.

“Sam and Henry have made the holiday season such a special and beautiful time of year for all of us, year after year,” said Mayor Coral Evans. “The Weatherford Hotel is delightfully aglow with lights and bows, music flows out from every level and the Pinecone is such a welcoming sign to all visitors to the downtown. Whether shopping, dining, sipping hot chocolate or counting down to the New Year, the Taylors have created true holiday magic.” FBN