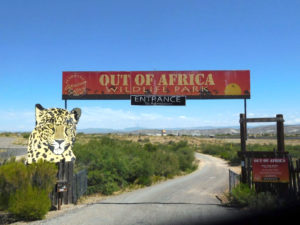 Out of Africa Wildlife Park has become a favorite year-round visitor destination in Arizona’s central highlands.

Ever-increasing visitation at the spacious 200-plus acre attraction will likely reach more than 150,000 guests this year, said Ashton Powell, public relations director for Out of Africa (OOA). Located just west of Camp Verde off I-17, it makes a great day trip for folks from the Quad Cities area – about 45 minutes by road. The same is true for those driving south from Flagstaff, and slightly longer for those coming from the Valley of the Sun.

Powell says guests are not only Arizona residents. “We track carefully where our visitors originate from. While about 65 percent are from the Phoenix area, the rest are coming from across the United States and from Europe, Asia and the other continents,” Powell said. She noted that North-Central Arizona has several attractions that bring visitors to the area and provide great benefits to the economic development of the overall region.

Many visitors pay for lodging and meals in adjacent communities such as Camp Verde, Cottonwood, Clarkdale and Sedona.

Steven Tillen and his family, from Brooklyn, New York, said visiting the park equaled anything they had ever seen on the East Coast.

Another couple, Jessica and Zachary Wagner, who recently relocated to Gilbert from Cody, Wyoming, said their visit to OOA was a special occasion, “an extraordinary experience we will not forget.”

It’s Not a Zoo

Dean Harrison and his wife, Prayeri, are the founder-owners of OOA. “This is not a zoo. Instead, you’ll see exotic animals from around the world roaming in spacious habitats similar to that which was native to their species. They are not confined in small cages and enclosures. Instead, they are in expansive fenced natural settings that could have come from their homelands. We wanted a non-traditional, genuinely natural kind of environment that would let the animals live naturally.”

Moreover, the animals are not just from Africa. They represent wildlife from Africa, Asia, Europe, Australia, North America and Central America.

Harrison is animated when he describes the animals at OOA. As he drives visitors around in an open-air safari vehicle, he stops frequently to talk about the wildlife wandering about in natural habitats.

The native Arizonan detailed his philosophy about creating a relationship with wild animals in his book, “Return to Eden.”

OOA has grown considerably since it was relocated in 2005 from its original 104 acres in Fountain Hills to the rough terrain of the Mingus Mountain foothills. Doubling the space allowed the Harrisons to add more animals, totaling more than 300 at the park now.

Popular attractions are lions, tigers, leopards, giraffes, zebras, a camel and rhinoceros. African hoof stock such as eland, nilgai, water buffalo, horned oryx and watusi cattle are up close to tour vehicles as they bump along.

OOA has a permanent staff of about 50 people who handle all aspects of park operations and maintenance.

In addition to the regular admission, an African Bush Safari and several special shows are offered. These include Creature Feature, Tiger Splash, Giant Snake Show, Predator Feed and Wonders of Wildlife. They also offer add-ons such as the sloth encounter, feed-a-tiger and the Predator Zip Line Tour.

OOA is open daily from 9:30 a.m.to 5 p.m., except on Thanksgiving and Christmas. The wildlife park is handicap accessible, and courtesy park shuttles run continuously from opening until 4 p.m. Parking is free.

The busiest time of year is March and April, although Powell says other months are catching up as word continues to spread. FBN

For more information about Out of Africa, visit outofafricapark.com or call 928-567-2840.