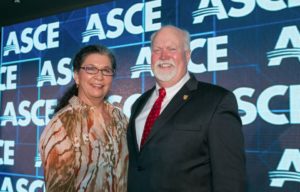 The engineering firm involved in such notable Northern Arizona projects as Timber Sky, The Village at Aspen Place, Ponderosa Trails, Flagstaff’s Southside Redevelopment, Winslow’s Downtown Revitalization Project, Coconino Community College Lone Tree campus and many other developments from Tusayan to Williams and across the state is celebrating 25 years in business.

Mark and Lupe (Guadalupe) Woodson founded Woodson Engineering and Surveying in June 1994 after Mark worked for the City of Flagstaff as the city engineer. Needing 12 employees in the first 18 months, they quickly outgrew their basement office. Today, the firm is located at 124 N. Elden Street in Flagstaff with a staff of 19, including eight professional engineers and four registered land surveyors.

For more than five years in a row, Woodson Engineering and Surveying has made the list of Top Design Firms in the Southwest by Engineering News-Record Southwest. “What makes this distinction notable is that we are the only firm on the list that is not located in a major metropolitan area,” said Mark Woodson.

In recent years, the firm’s workload has been growing at a fast pace. The backlog has doubled since the end of 2017.

“We attribute much of our success at Woodson Engineering and Surveying to our special attention to family,” said Mark. “It’s a very important value to me personally. We have also been fortunate to have top-notch, dedicated staff over the years and many repeat clients, for which I am very grateful.”

One of Woodson’s earliest, longest running and most satisfying contracts is with the City of Winslow as the contract city engineer. “Our work in Winslow for over 20 years has resulted in many dozens of projects.”

Perhaps the most visible is the revitalization of the historic downtown area, known as Renaissance on Route 66. “We’ve managed this multi-jurisdictional project since its inception.”

The redevelopment project has spanned two decades with more than $20 million in improvements for the city, including the Standin’ on the Corner Park. The company provided master planning, engineering and construction administration services. The site now averages 100,000 visitors a year. And, the project was awarded the American Public Works Association (APWA) Project of the Year in Historical Renovation/Preservation.

The company also provided the survey and design for Coconino County’s Copeland Basin Flood Control Project after the Schultz Fire. Woodson explained that “the county recognized how well it worked after a recent 1,000-year storm event last summer.”

Woodson served on the Flagstaff City Council from 2012 to 2015. As the city engineer, he was part of the leadership team that put into place standards for the country’s first International Dark Sky City. He also worked on the development of the award-winning Flagstaff Urban Trail System (FUTS) and modern Sign Code.

Woodson has received numerous awards and served on governor-appointed committees. He is an active member of both the University of Arizona and Northern Arizona University Civil Engineering Department Advisory Councils. In 2015, he was  named president of the American Society of Civil Engineers (ASCE).

“That was truly a once-in-a-lifetime moment for Mark and a well-deserved honor,” said the company’s senior project manager, Jeff Swan, after Woodson’s inauguration. ASCE has more than 150,000 members worldwide and is committed to advancing the civil engineering profession through technical and professional conferences and continuing education, and advocating for improved infrastructure and environmental stewardship.

Woodson’s election as president helped bring additional focus on rural areas and their economic development through investment in infrastructure, particularly important for tourism. “We’ve always taken the approach that if we’re going to tear up the surface to get to the aging, and often failing, utilities underneath, let’s put some extra effort into the finishing touches on the surface. That way we can also improve the charm and appeal of the historic downtown areas,” he said.

As an example, the improved streetscape along Flagstaff’s San Francisco and Beaver streets south of the tracks was designed by Woodson’s team. The firm also worked on the design of Fourth Street improvements with an emphasis on beautification elements and the pedestrian experience.

“We feel genuinely blessed to have been a part of this important chapter in Northern Arizona’s development and having a hand in shaping projects that have benefited communities, families, visitors and the regional economy,” said Woodson.

Mark and Lupe have four children and nine grandchildren. They have lived in Flagstaff since 1986. FBN