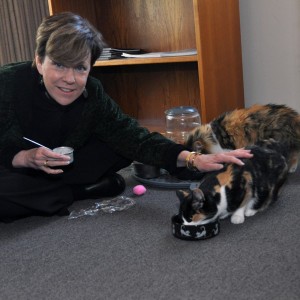 Girlie, a fluffy calico cat, has a great new home, complete with a stunning view of the San Francisco Peaks. Her bed is comfy, too, and is located by the desk in the office of Lynne Nemeth, executive director of The Arboretum at Flagstaff. Along with her relative, Cleo, they are on 24-hour rodent patrol inside the historic Walter Reichardt House, the former stone home of the non-profit organization’s founder, Frances McAllister.

“Girlie rolls around when I come in the morning,” Nemeth said. “She had been named Fireball by the vet, because she was vicious, but she’s not vicious any longer, so I renamed her. They live in here, so they can roam around. They have about 3,500 square feet to take care of in the building.”

The two female cats, possibly sisters, have been living at The Arboretum since mid-October and are part of the new Working Cats Program through Paw Placement of Northern Arizona. The program is working with the Coconino Humane Association (CHA) to reduce the euthanasia rate there.

“There were in excess of 200 cats last year that were deemed feral or unadoptable and were put down, so that’s what we’re trying to address,” explained Pamela Tharp, who is on the of Paw Placement board of directors. “These two were in a hoarding situation; they don’t learn to be socialized, so that makes it really difficult to place them. Technically, we would not call these cats feral, but unadoptable. They’ve been around people, but just the wrong people.”

Tharp said animal control removed them and took them to CHA, where overcrowding ultimately led them, and their kittens, to another home at the Ark Cat Sanctuary in Parks.

“This type of program gives homeless cats a second chance at a good life,” she added.

Girlie and Cleo are the first Working Cats to be placed in a business, but other cats have already been assigned for duty at private ranches and barns.

The two cats went through a trial period at The Arboretum until the beginning of November and passed with flying colors.

“They’re doing great; since they’ve been here, we haven’t had any rodent issues in this house, so they are great deterrents,” Nemeth said. “Their job is to keep the deer mice out of here, which carry hanta-virus. We also have white-throated wood pack rats, which come into the old buildings. It just can become a health issue, but rodents also damage wiring, build nests and get into food.”

The Working Cats brochure promotes the program as “great resource” for property owners to protect their property “in an environmentally safe way and save the life of a homeless cat at the same time.”

There is no adoption fee for “hiring” a working cat.

Typical candidates for Working Cats are happier living independently or prefer to keep their distance from humans, but still need a protected or sheltered living arrangement.

When visited for this report in mid-November, Cleo hid much of the time behind a pet pen, but both cats rushed to enjoy treats from a can of wet cat food and to eat eagerly from the kibble bowl offered by Nemeth. They also let her pet them behind the ears.

“The cats have been very responsive to the humans here, so I’m very pleased,” Nemeth observed. “I think it’s a great way to save these cats. Everyone needs rodent control, and it’s so much better to have cats than to put poison down.”

I don’t want them to be outside because of the birds. Also, we have a lot of coyotes, and coyotes love to eat cats. We’ve also had bobcats come through here.”

“They sense they’re safe, that there’s not a threat here.”