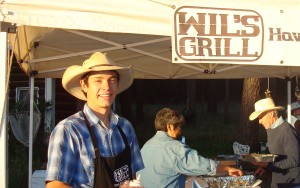 Every now and then, John Christ and his dad start comparing battle scars. One would think they got their injuries on some far away battlefield. Not true. Their scars come from the kitchen.

John, 22, the owner of Wil’s Grill, has been involved in cooking since he was about two and has the scars to prove it.

“When I was six or seven, I almost cut my finger off cutting an avocado. I have scars and burns,” His dad is a veteran cook and has a few of his own.

“We were showing each other our battle scars. We were joking about it over the weekend.”

Ever since he was two or three, John was itching to get into the kitchen, said his Mom, Tracy. “He used to sit on the kitchen counter and help me with whatever I was doing,” she said. “I would give him the measuring spoons and he would crack eggs.”

Then, when he was five or six, he was able to follow directions and make actual dishes. When he was a teenager, he helped his dad grill and helped with dinner. It was something he could do with his dad, and

“They are still doing it,” his mom said.

“Eventually, John wanted to start a business and be his own boss,” she added.

Wil’s Grill, with a motto of “Have Grill Will Travel,” hit the catering trail and has become quite the success in a very short time.

“I’m doing my best every day to improve it. I’ve been at it for a year and a half and we have a long way to go,” he said. “That is the mentality we always hold. There is always room for improvement. Quality is the entire basis of the business, not only the food but the service.”

Karen Malis Clark of Flagstaff is a fan.

“’During an Art Walk evening a few months ago, I enjoyed Wil’s Grill food at the State Bar. I was impressed with the young, enthusiastic owner and took his card. Recently, when the Flagstaff Leadership Program was looking for a caterer for our special 25th anniversary alumni picnic, I suggested Wil’s Grill. John demonstrated impeccable business manners and was a pleasure to work with. The presentation was superb and our meal was yummy,” Clark said.

The Christ family has some history in food preparation.

His parents operated a grill at the Pioneer Living History Museum.

“They did that when I was a little kid, from about nine to 13. I was always there. I would dress up in a chef uniform, go out into the dining room asking how the meal was,” he said. “I always wanted to light the grill because it was an honor. Back then I didn’t realize I was learning how to grill and entertain people. Now, it just comes naturally.”

But, eventually, his parents left the business. They realized it was not a place to raise children. They wanted to devote more time to their children, John and Bekka.

“It’s been quite recently that it dawned on me, not only is it a passion, it is a way of life,” he said. “I can sustain a way of life and do something I love and not have my creativity harnessed.”

“This weekend was pretty tough. I worked probably in the last two weeks, no shorter than 15 and sometimes

He just finished a weekend-long cooking for the annual Firefly Festival outside Flagstaff.

“We were serving food for a bout 15 hours a day,” he said. “They had a food court and we were part of the group of people doing similar things.”

When people learn he earned a degree in environmental studies from Northern Arizona University, they are surprised, but John says it makes sense.

Eventually, he wants to grow and raise everything he puts on the plates of his customers.

John and his sister were raised in Cave Creek, before moving “all over the place, mostly in Northern Arizona.”

He named his business Wil’s Grill, after his father, Wil, who gave him his first grill.

“We use his barbecue sauce and recipes,” he said.

While Bekka jumps in to help Wil’s Grill in a pinch, most days, she is working on a second master’s degree in public administration, after already earning one in social work.

He also likes to play guitar and harmonica. A man of many talents! FBN