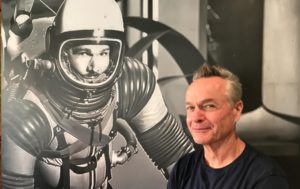 Flagstaff’s Southside renaissance continues with a new restaurant that offers no frills, simple food while paying homage to Flagstaff’s space training heritage. Owner Patrick Flanigan opened Carmels in June after hearing what the community wants in terms of food and atmosphere.

“I didn’t want Scottsdale in Flagstaff. I’ve got an old building in a historic place and wanted everything to look like it belonged here,” he said.

The result is an eatery touched with elements of nostalgia. The very name, Carmels (pronounced CARmels), is after his mother. The interior boasts a combination of new and gently used furniture, and the checkered linoleum flooring is not typical of modern buildings. Flanigan matches this visual identity with sound – he plays a Pandora Internet radio station featuring classic tunes from the ‘60s and ‘70s.

While these elements set the stage for the restaurant’s ambience, a picture that stretches from floor to ceiling drives the point home. It shows astrogeologist Gene Shoemaker, founder of the USGS’s Astrogeology Science Center, dressed in a Gemini space suit from the 1960s. Flanigan plans to add several more throwback space-themed images.

Flanigan grew up in California and was a self-proclaimed science fiction fan, enjoying trips to Disneyland and finding particular delight in Tomorrowland. This came back to him while looking through Richard and Sherry Mangum’s book, Flagstaff: Past and Present. He saw pictures of trains and lumbermen and other facets of Flagstaff history, but then came across a section highlighting the astronaut training that took place here.

“This really struck me and I decided to use this as part of my motif. It’s an important part of Flagstaff history, but where else do you see astronauts on the wall of a restaurant?”

As for the food, Flanigan wanted a menu that was simple and did not try to force some culinary agenda onto his customers. He thinks a common problem with many restaurants is that the food is over seasoned or covered in so many sauces that customers really do not know what they are eating.

“We’re using good but basic ingredients, without all those sauces and extras. It’s a simple application with the best ingredients possible. We use real maple syrup, fresh-squeezed orange juice, Applewood bacon, cage-free eggs, scratch items made in the kitchen.” Flanigan’s artisan bread “is cut thick and we put a lot of butter on.”

Some of the more popular breakfast items include savory crepes and chicken & waffles and croissant French toast, while lunch favorites include Carmel’s sirloin burger, a “gooey grilled cheese” and sirloin chili bowl. Beverages include an assortment of beer, mimosas and Bloody Marys. Flanigan said he tried wine but his customers just did not seem to want it.

“The menu works well,” said Phoenix resident Bob Young, in town for a hiking trip to the Grand Canyon. He said he has been through Flagstaff many times and was surprised to see this new restaurant. “The look of the place caught my attention and I changed plans to eat at another restaurant, coming here instead. I loved the BLTA (bacon, lettuce, tomato and avocado) and savory pinto beans. This is a great addition to Flagstaff’s Southside and I’ll be back.”

Flanigan moved from California to Phoenix in 1990 and served as a sportscaster and then weatherman. He later fixed up old homes before opening a bakery-turned breakfast place in 2011. The owner of the building housing his restaurant went bankrupt and Flanigan had to close. He wanted to open a new restaurant and decided to do so in Flagstaff, where he and his wife had owned a second home for years. He bought the building on South San Francisco Street, and is now looking to buy the adjacent structure.

Flanigan said that while several restaurants around Flagstaff have gone out of business recently, he was not discouraged by opening his own. “For me it was just like, here are my chips and we just have to go and believe I can make it work. I wasn’t doing anything wacky or eccentric so felt comfortable that I could make it work.”

Carmels is open daily from 7 a.m. to 3 p.m. Flanigan employs about 20 part-time staff to work the breakfast and lunch crowds.

He said business has been excellent, and that is largely due to keeping things simple: “We offer a big breakfast or big lunch with good food at a good price. Period.” FBN