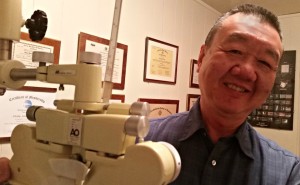 It is not surprising that people in Flagstaff talk about the personalized service provided by Dr. Phillip J. Wong. Besides successfully navigating the changing Flagstaff market for more than 38 years, the eye doctor comes from a family of longtime Flagstaff service providers.

“I think the most important thing for a successful business in Flagstaff is that you have to deal with everyone on a personal level. I think that would be true in any market. You have to show patients that you care,” said Dr. Wong. The optometrist is a second-generation Flagstaff business owner. His father, Peter Wong, operated the Weatherford Café in historic downtown Flagstaff for decades.

“My father had eight kids, and we said that he had free labor,” laughed the doctor. “The boys were the cooks and the girls were the waitresses.” The Flagstaff native attributes part of his dedication to customer service to what he learned while working in his father’s business.

Although the Weatherford Café was closed on Mondays, if a regular knocked on the locked door, he would be served. Restauranteur Peter Wong had a contract with the jail to feed the inmates seven days a week. “Even if the restaurant were closed, he’d let the regular customer come in and have a ‘jail meal.’ He was cooking it up anyway,” said Wong with a grin.

The Weatherford Café was so successful that the partners eventually split off and launched additional businesses. “Henry Fong moved to Winslow and opened Henry’s Drive Inn. Bobby Gee had the Hong Kong Café in the building that now houses Karma Sushi Bar Grill. Kenneth Gee opened Golden Star (and later Dragon Palace) that is now O’Reilly’s Auto Parts. Tommy Wong had Wong’s Place.” Wong’s father, who had served in the South Pacific during WWII, retained the Weatherford Café.

Dr. Wong remembered delivering meals to the Monte Vista Hotel where the legendary Shine Smith, “The Cowboy Preacher of Arizona” lived for a time. “He had a closet full of toys, and he’d give you one,” the doctor fondly recalled. Shine Smith, originally a missionary to the Navajos, worked with Hollywood making movies on the reservation. He was also known for his toy drives that benefited Navajo families at Christmastime.

Another memory of personalized service was cooking a special order – a hamburger (no bun) for a hotel guest’s dog. “I remember him telling me that he was writing a sequel to his book about traveling with his dog. I was in eighth grade, I didn’t know who John Steinbeck was back then, but I think it was him. My brothers and sisters tell me I’m crazy,” said the doctor, who hopes to research the story and vindicate himself someday.

Although Wong left Flagstaff to earn his undergraduate degree in biology at the University of Arizona, and later graduated from Southern California College of Optometry, he always planned to return to open the optometry practice. “Most of the people that I went to high school with left town,” said the 1970 Flagstaff High School grad.

“Originally optometrists dealt only with healthy eyes, but now, in Arizona, we can do therapeutics that includes foreign body removal and treating eye infections, anterior segment disease and glaucoma. We don’t do surgery,” said Wong, who is almost a one-man show with the help of his office manager, Denise Mahar. “We run like an old-time-family doctor,” he explained.

Wong and his wife, Jackie, own Wild West Traders and the building in which it is located at 106 East Route 66. The building has an entrance to Flagstaff’s historic underground tunnel system where Chinese immigrants were rumored to live during the late 1800s. The rumors have since been debunked by local historians. “The building has an entrance to one of the tunnels,” said Wong. “But when we opened it up, it had been backfilled.”

“I never went through a tunnel myself,” he said. “But Albert [Wong] told me that they could go from the Grand Canyon Café to other businesses in downtown. I never talked to my dad about the tunnels.”

“They really didn’t live in there, but the tunnels were a way to get from one business to the next,” explained the eye and vision service provider, who plans to retire soon.