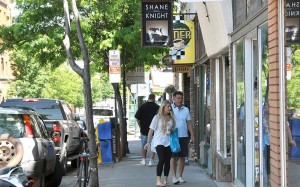 Hey Arizona, Flagstaff is all grown up and no longer the little sister living in the far-reaching shadows of glorified big sis, Grand Canyon.

Where Flagstaff may once have been considered a stopping-off place on the way to or from one of the world’s top natural wonders: no more! The Flagstaff Convention and Visitor’s Center has the data to back what city leaders, locals and travelers have known for some time: Flagstaff is a place people want to go because, well, it is Flagstaff. Period.

The Flagstaff Convention and Visitor’s Bureau cites results from a year-long study conducted in 2014. “It shows us we have visitors coming to Flagstaff for Flagstaff. They are not coming to go to the Grand Canyon and happen to be in Flagstaff,” said CVB Tourism Specialist Joanne Hudson. “There is that component, but quite a lot of people come to Flagstaff as their primary destination.”

Although the survey shows some 39 percent of tourists come to the mountain town because of the Grand Canyon, 49 percent cite Flagstaff’s Historic Downtown as the place they come to visit.

CVB Marketing and Public Relations Manager Heather Ainardi says most of Flagstaff’s tourists are from the greater Phoenix area. “One of the top drivers is climate relief. People from the Valley are coming for hiking, camping, mountain biking and cultural activities. Lowell Observatory is one of our top attractions.”

She says 50 percent of tourists report dining out. “A majority of our visitors are eating at our well-known restaurants, many of which are downtown. People are coming for Beaver Street Brewery, the Monte Vista and the Weatherford Hotel.”

“We have not done a visitors survey since 2005, before the recession,” said Hudson.

“We now know who our visitor is, their average age and how many people in their party.”

Tourism officials say they are a little surprised that the average age of Flagstaff visitors is 52 years old. Hudson believes it is because of the number of retiring Baby Boomers who have more time to travel. “This is an observation and is based on national travel trend research regarding generational travel,” she said.

The survey also reveals that 60 percent of visitors are with family. The number of members in the traveling group averages 3.1. They spend about $553 per day; 75 percent stay overnight and their average household income is $99.000. International visitors make up 11 percent of the total visitors.

Another positive tourism indicator is the Bed, Board and Booze (BBB) Tax, which is up 11.75 percent from last year at this time. Tourism officials say this two percent tax – used for beautification, recreation services, historic preservation and economic development – is a measure of how the hospitality industry is doing overall.

“Every month, we are up significantly,” Hudson said. In January, hotel occupancy was 20.04 percent above figures from January 2014. She credits the number of special events such as the Super Bowl, Pro Bowl and “a wonderful snowstorm in January that made skiing heavenly” with the upward tick.

“In the winter, having the North Pole Experience and snowmaking at Arizona Snowbowl has made a difference in our ability to market consistently versus just when it snows,” said Ainardi.

On average, hotel occupancy is up 7.3 percent from last year at this time. With these figures, Hudson says she expects new properties and more hotel rooms coming onto the market. “We will see some construction going on.”

“It’s going great!” said Days Hotel Flagstaff owner Karan Patel. “Everything is up as far as occupancy [and the average price of a room]. It is good to have business that makes me feel comfortable and safe enough to invest in more businesses.”

Although a lot of Flagstaff’s visitation is still driven by regional attractions, Ainardi says people may come for one thing, but they experience so much more. “We’re not a one-hit wonder any more.” FBN