You are here: Home / FBN Spotlight / Hospitality from Kabul to the Grand Canyon 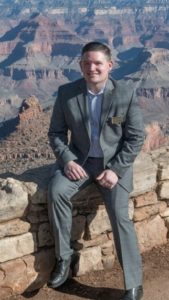 Traveling almost 8,000 miles to fill his new position as food and beverage director for Xanterra at the Grand Canyon South Rim Lodges was an “easy” decision, says Todd Rodemyer, who left Kabul, Afghanistan, for the Grand Canyon. “It was the best move I’ve made yet. I really like it here.”

While in Kabul, Rodemyer worked as a government contractor for the U.S. Embassy, managing the food service for the entire state department operation, which includes six dining facilities and catering from the ground up. “It was an amazing experience and I had a great relationship with the ambassador and state department commanders.”

Although he was in a war zone, he says he always felt safe at the compound in Kabul, because it was guarded by Gurkha Guard Force. “They are some of the greatest and most dedicated soldiers I’ve ever been around.”

He adds that it was intense at times. “I was there when … a military hospital [was attacked] a few blocks down from the embassy. Another time, a bomb exploded in front of the German Embassy.”

It would seem that Kabul would be quite different from the Grand Canyon, but Rodemyer says there are some similarities. “We lived on the compound near the embassy, much like here at the Grand Canyon Village where we work and live nearby and have a close relationship with work associates.”

Rodemyer’s management style has remained similar, focused on communicating with the team and leading by example. “I was an infantry platoon leader so I think it’s applicable in food and beverage to lead from the front. At the end of the day, a manager needs to be on the floor leading the team.”

“Todd brings a diverse background in food and beverage, including high volume operations that leave him undaunted with his task here at the South Rim,” said Xanterra Grand Canyon South Rim Lodges General Manager Mia Bell. “His leadership and commitment to high levels of customer service will be a major contribution to our food and beverage outlets. We’re very excited to have him join our team.”

Along with the administration of the food and beverage at the legendary El Tovar Restaurant, Rodemyer will also be in charge of the Harvey House at the Bright Angel Lodge, Maswik Cafeteria and the Arizona Steakhouse (formally named the Arizona Room). He will also oversee the food service trucks and food carts, which will be stationed at the Grand Canyon Visitors Center and along the rim.

Rodemyer was born in Chicago but attended high school in Pittsburgh, which he considers his home. “This is my first time living in the West and first time working at a National Park. It’s a new adventure and I look forward to exploring the Western United States.”

Though Rodemyer has not had a chance to hike the Grand Canyon yet, he says he is looking forward to it.

What is your favorite activity on your days off?

“Skiing and spending time with my girlfriend, Cara, and my rescue dogs.”

If you could change one component of your job, what would it be?

“Honestly, more hours in the day and I would clone myself.”

What is the greatest feat you’ve ever tackled?

“Taking over the food and beverage in Afghanistan. We were running 8,000 meals per day in a war zone.”

What makes you smile?

“My rescue dogs. They are very near and dear to my heart. I wish I could do more, as there are so many dogs that need a home. I own three, a pit-bull mix, Labrador mix and a Rhodesian Ridgeback mix.”

What animal would you compare yourself to and why?

“The horse. According to an online quiz, the horse-type personality is a bit of a busy body, can’t sit still for long, travels a lot with plans all over the place, considers family a top priority and a great person but sometimes needs to slow down. Yep, that would be me.” FBN