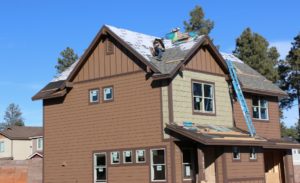 Amanda and Andrew Atherton will likely be moving away from Flagstaff this summer, primarily because of the area’s cost of living. Married for two years, the couple would love to stay in Flagstaff, but the high cost of rentals makes saving for a home down payment too difficult.

Amanda is finishing a graduate degree in mathematics at Northern Arizona University, and as part of her scholarship, will work for two years at a high-needs middle or high school, most likely in the Prescott region. Andrew, a computer whiz, is highly employable anywhere.

Since coming to NAU eight years ago, Andrew has experienced the population boom, including a big growth in the number of college students, which he says has further driven up housing costs.

Both Andrew and Amanda are from Prescott but met in Flagstaff. During their time as a couple, they have watched most of their friends move away from Northern Arizona to more affordable places like Phoenix, Tucson and Albuquerque, a trend they say challenges the city’s future vitality.

The high cost of housing has become a crisis, says John Stigmon, president and CEO of the Economic Collaborative of Northern Arizona. Stigmon has been steeped in housing statistics following a housing study conducted by NAU’s Alliance Bank Business Outreach Center. The study is part of a report by ECoNA and Werwath Associates, a Santa Fe based community development consulting firm hired to help area employers better understand the region’s workforce challenges.

Like the Athertons, more than half of the nearly 6,000 survey respondents are considering moving away from Flagstaff in the next five years because of the high cost of housing.

The survey was sent to employees of the region’s 15 largest employers, including NAU, Northern Arizona Healthcare, W.L. Gore & Associates, the City of Flagstaff, Coconino County, the Flagstaff Unified School District and others.

The study reveals 43 percent of area households are cost burdened because of the high price of housing.

Zooming out, Coconino County has seen a substantial increase in the labor force, with U.S. Census data showing approximately 74,000 employed residents. The region also is attracting people who can work from anywhere by telecommuting. An estimated 10,000 people commute to Flagstaff, the county’s largest employment hub, from Williams, Winslow, Munds Park and many other locales.

None of this is a surprise to Ron Hasse, chief human resources officer for Northern Arizona Healthcare, one of the city’s largest employers. From his perspective, housing presents two real hurdles. “The first way is attracting people to our area and the second way is trying to retain them,” said Hasse, who has worked in HR for about four decades. With Phoenix just two hours away, people can earn as much working there and potentially pay about half as much for housing, Hasse added.

Northern Arizona Healthcare administrators are participating in an executive leadership roundtable, an effort to identify solutions for the region’s workforce housing shortage.

Stigmon, who plans to share the housing data with the Coconino County Board of Supervisors in March, addressed the Flagstaff City Council last month, referring to the workforce housing shortage as “the perfect storm.”

Stigmon explained that higher rents prevent individuals from saving enough for a home down payment. A 2015 American Community Survey showed Flagstaff’s homeownership rate of 45 percent was lower than the comparable communities of Durango, Missoula, Bend, Santa Fe and others. Arizona’s statewide average of homeownership is 63 percent.

Because the region’s economic vitality and workforce sustainability are closely tied to housing availability and affordability, Stigmon and other community leaders want an expanded conversation about potential solutions. While most of the city’s largest employers offer housing programs ranging from education to down-payment assistance, other U.S. cities and some major employers have more notable successes, models that could provide insights to Northern Arizonans.

The recently released Housing Attainability for the Flagstaff Workforce Report offers a constraints and recommendations matrix; suggestions include regulation adjustments to make affordable housing projects more appealing to developers, high density student housing in the right areas along with additional public and private programs, including down payment assistance.

Other suggestions for consideration include pursuing a bond issue for affordable homes and using city or private/employer owned land to leverage development for workforce housing.

“The data show an unstable workforce that is more serious than we thought,” said Stigmon. Getting the community educated and involved is an important next step, he added. “We have a much greater crisis on our hands than we even imagined.”

Individuals interested in a copy of the housing report can email John.Stigmon@econa-az.com. FBN

Numerous three-bedroom homes are under construction in Presidio in the Pines. The west Flagstaff home prices start in the mid- to upper- 300,000s.