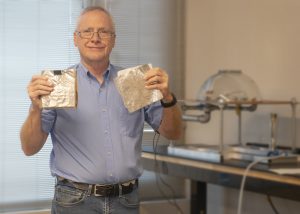 Whatever NASA wants to deliver to a planet or a moon from space – whether it is medicine, robots, experiments or humans – HeetShield founder and CEO Steve Miller is engineering a protective thermal insulation product that can wrap around it. He is testing his science technologies material now in Moonshot at NACET’s laboratory on McMillan Mesa.

His patent-pending material has the attention of the Forest Service as well. This month, as wildfires rage across the West, the entrepreneurial innovator is developing a better fire shelter, one he hopes can withstand high heat 20% longer than those being used on the fire lines today.

“We have two materials that are more efficient than what’s currently available,” said Miller. “They are both in the neighborhood of half a millimeter thick. We can make them thicker if we need to, but no one makes thermal insulation of that thickness that is as efficient as ours are.”

Thinner than a matchbook cover, Miller’s HeetShield material can withstand temperatures of at least 3,000 degrees Fahrenheit to survive the descent from space through Earth’s atmosphere. It also blocks radiation.

“Let’s say you’ve got your payload in a one-gallon paint can and you need to get it to the surface of a planet,” he said. “NASA has this concept of a Hypersonic Inflatable Aerodynamic Decelerator (HIAD) that might be deployed from the International Space Station or a rocket lab. This HIAD is an inflatable vehicle. The bottom part looks like half a sphere. You put your paint can in the bottom of the sphere, which then surfs through the atmosphere, and the payload is recovered on the ground. The HIAD is protected by our material.”

Like many products designed for space, Miller believes his HeetShield technology has valuable applications on the ground.

“The current fire shelter uses a layer of silica cloth with foil on the outside to reflect the heat of the fire away and then on the inside there’s another layer of foil and fiberglass cloth. We’re proposing to add a very thin layer of our material in between the two layers,” he said. “Today’s fire shelters offer protection 92% of the time. We’d like to improve that.”

Miller’s interest in thermal insulation material began when he was a teenager growing up in Los Angeles. “I used to enjoy escaping the big city and going to the mountains and I wasn’t convinced that the clothing and sleeping bags sold at the time were as good as they could be. So, I began working on new materials that I thought would work better.”

Later, he presented his ideas for clothing insulation at a conference. A participant suggested he talk to his colleagues at NASA who developed insulation for the space shuttle. “Over the years since then, I’ve had access to some incredibly smart people and amazing test facilities.”

Miller has been developing his HeetShield material for more than a decade, but during the pandemic, it has taken off. He founded the company in September 2020, hired five part-time employees, including recent Northern Arizona University graduates, and applied successfully for grants though NASA’s Small Business Innovative Research program.

In April, HeetShield was invited to move into the labs at NACET, Flagstaff’s business incubator and accelerator. “The facilities are beautiful,” said Miller. “They have very talented mentors. Through the people at NACET, I’ve been connected with people to help with patents, I’ve connected with people at ECoNA, I’ve connected with people at the Arizona Commerce Authority. Last month, they helped us install our quality management system so we can move our technology out of the lab and into production. We have to be able to produce materials very consistently and reliably, so that’s been a major milestone for us. It’s been just a wonderful collaboration even in this short time.”

“Having HeetShield on campus benefits the Moonshot at NACET program and the City of Flagstaff,” said Executive Director Diana White. “The advancements Steve and his team are making will positively impact science, and protect and save lives. We are so proud to be a small part of HeetShield’s journey.”

Miller has been in Flagstaff for 27 years. Since he was 10 years old, riding the train through Flagstaff on a school trip to the Grand Canyon, he knew he’d want to live here one day. “I love the mountains. I love being close to NAU. I feel a real sense of community here.”