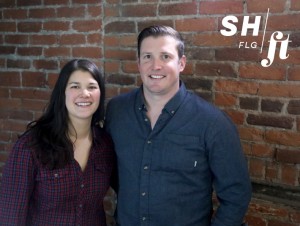 After their wedding in September 2015, Dara and Joe Rodgers wanted to kick off their marriage with a slight change in direction – a kind of shift.

When it opens its doors in April, that change will have manifested in Shift, their new restaurant in the historic Babbitt Building downtown.

“We really wanted to dive right in to life with the wedding and opening a restaurant,” explained Dara, who is originally from Boulder, Colorado. ”We both felt we were ready for a change in our lives and felt that the Flagstaff food scene needed a change as well. For the restaurant, we wanted to bring our fine dining backgrounds of composed plates, but with a casual atmosphere.”

Joe, who is from Sedona, has been living in and out of Flagstaff for 14 years and has been cooking in kitchens and bakeries for almost two decades.

They met two years ago at Frasca Food and Wine in Boulder, where Joe was working in the kitchen and Dara was a pastry cook.

“We met doing what we love, cooking,” Dara said. “Shift will be our first child. Hoping to have human children later on.”

They decided to plant roots in Flagstaff because of the excellent job opportunities in the culinary field.

They have secured a prized location on San Francisco Street near Aspen, formerly occupied by two coffeehouses, Flag Buzz and Late for the Train.

The innovative interior includes a new kitchen and a bright, classical brasserie-style design.

“We wanted to get away from the dark industrial trend,” Dara said.

Shift can seat 34 guests and features an intimate, eight-seat interactive chef’s counter, inspired by Lower 48 in Denver, she noted.

“We’ll be cooking face-to-face with diners,” said Joe, who was a part of the opening staff for Chautauqua Dining Hall in Boulder, and Lower 48 in Denver. “There’s no hiding what’s happening in the kitchen or on the plate. We’re hoping guests can see and feel the passion that we’re putting into every dish.”

The dinner-only and Sunday brunch menu will feature plates of progressive dishes that can be shared, creating a modern dining experience through the use of both familiar and exotic ingredients.

“Our food style is American small plates with locally driven vegetables and proteins,” Dara observed. “Our menu ranges from $3 to $19. You can sit down for two hours and have everything off the menu, or you can get just a few small plates or a nicely executed dessert and be on your way. “

The pastry chef said she has a “huge sweet tooth,” but prefers desserts that have a savory influence and are not overly sweet.

Dara learned her pastry skills at the Cook Street School of Culinary Arts in Denver and has been working in restaurants ever since. She also has a degree in business management from the University of Denver.

The couple has already tested the waters in Flagstaff, with Joe helping open the Tinderbox Kitchen and Annex Lounge and Bar, and Dara helping open their third establishment, The Tourist Home Urban Market, last year.

Joe will be the head chef at Shift, while Dara will be overseeing the pastry side of things, as well as operations. In addition, Connor Barrett will be the general manager, working with a staff of about 10 people.

“The Shift name is a testament to the fact that we’re looking to excite and challenge our fellow locals and expand their tastes,” Dara added. “We think Shift can signal a change in the way folks think of mountain-town dining.”

Additional restaurant details, a full menu and an opening date will be released soon.

Those in search of a new culinary adventure can sign up for updates at www.ShiftFLG.com and also enter to win a chef’s dinner for four.