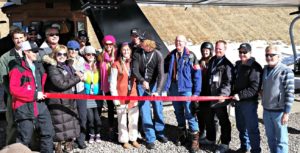 “This is the biggest lift of all the projects we’ve done in North America this year. And that includes Vail and Jackson Hole,” said Jon Mauch from Leitner-Poma of America at last month’s celebration of the opening of Arizona Snowbowl’s latest new lift. “The Grand Canyon Express is largest in terms of length, vertical, slope length and horsepower,” Mauch, sales and marketing director of the Grand Junction, Colorado-based firm detailed later in an interview with Flagstaff Business News.

The opening celebration for the Grand Canyon Express lift, Arizona’s first six-person chairlift, was held on Saturday, Dec. 10. The ceremony included a ribbon cutting by the Greater Flagstaff Chamber of Commerce and a champagne christening by Tonia Coleman, wife of James Coleman, managing partner of an investment group that owns Arizona Snowbowl and four other Southwest ski resorts.

The new high-speed, detachable lift and last year’s addition of the Humphreys Peak lift are part of the nearly $10 million in mountain improvements across a multi-resort capital campaign made by the largest ski area collective in the Southwest. The group includes Purgatory Resort and Hesperus Ski Area (CO), Arizona Snowbowl (AZ), Sipapu Ski & Summer Resort and Pajarito Mountain (NM).

“We appreciate all the support of local businesses – we couldn’t do it without you,” announced James Coleman. Coleman and his family; Mauch and Jean-Francois Mugnier, vice president of Leitner-Poma of America; Pat McGervey, Coconino National Forest; Flagstaff Mayor Jerry Nabours; and Julie Pastrick, Chamber CEO, were some of the dignitaries at the celebration.

“Flagstaff has been a ski town for over 75 years. We’re going to respond to the growing population in Arizona that wants winter recreation opportunities,” said Arizona Snowbowl General Manager J.R. Murray. He recognized Pastrick for encouraging improvements to the resort. “The Flagstaff Chamber of Commerce was the first to support the master plan. The Chamber has led the way and has been the hood ornament for local support,” he said.

After the ceremonies, participants rode the smooth and quick lift to an elevation of 10,900 feet to capture views of Arizona’s most famous landmark. The ride takes less than six minutes to get to the top of the lift when operated at full speed. The six-pack lift, powered by twin Cummins 500-horse-power diesel engines, can transport 1,800 people per hour to the Midway area.

“The Grand Canyon Express is an incredible machine,” said Arizona Snowbowl Project Manager Dale Haglund, who recognized Flagstaff’s Shaum Electric as playing an important role in the construction project. “James Coleman and the partnership have put the money forward to make a lot of improvements right up front.” It was less than 28 months ago that the partnership announced that they were going to purchase Arizona Snowbowl.

According to Murray, projects for next season include replacing the Hart Prairie double chairlift with a four-person chairlift. “This project will greatly increase the uphill capacity and reduce lift wait times for beginners,” he said. That chairlift will be easier to load and unload and enhances Arizona Snowbowl’s disabled skier program by accommodating specialized equipment.

Improvements for the 2017-18 season at Arizona Snowbowl, one of the oldest continually operating ski areas in the country, will also involve base lodge upgrades with more dining seating, restrooms and expanded kitchen and food service at Hart Prairie Lodge.

According to LiftBlog.com, Arizona Snowbowl’s new Grand Canyon Express is one of 39 new lifts built in North America in 2016. Leitner-Poma and sister company Leitner built eight of those including the one at Arizona Snowbowl. Since 1989, Leitner-Poma has been designing and manufacturing lifts in Grand Junction with a labor force that expands to 120 employees during high production times. FBN