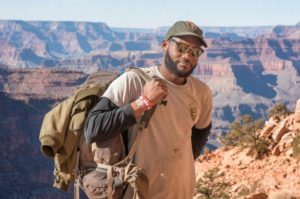 On the “bucket list” for people all over the world is to hike the Grand Canyon, most notably, the Bright Angel and Kaibab Trails. Of the six million-plus annual Grand Canyon visitors, it is estimated less than 7 percent actually hike down into the canyon (only 1 percent to the bottom). Even so, that adds up to 434,000 hikers a year on the corridor trails.

Maintaining these popular trails for safe passage are many people who work at times in high heat and low temperatures to ensure hikers and mule riders a safe journey.

The key player is the National Park Service (NPS) which, when fully staffed, employs up to 75 people and maintains about 126 miles of trails (there are approximately 358 established trails). “This includes up to 40 NPS staff and the conservation corps volunteers,” said NPS Trails Program Manager Christopher Brothers. “Right now, we are understaffed, which is a big challenge.”

“Trail work is very physically demanding. In order to succeed, workers have to be physically and mentally conditioned to work in a harsh environment. Those of us who have worked on trail crews for many years have endured harsh weather, dangerous working conditions, injury and days away from family,” said Brothers, a volunteer who has worked on the Grand Canyon trail crew for more than 23 years.

Perhaps the most visible members are those in the conservations corps, which employs youth for projects on public lands. Two of these agencies are located in Flagstaff: the American Conservation Experience (ACE) and the Arizona Conservation Corps (AZCC).

ACE was founded in Flagstaff in 2004. The program is for young adults between the ages of 18-25 who are considering land management as a career path or potential course of study. Corps members serve in professionally supervised teams as they explore future outdoor careers, learn practical field skills and develop confidence as emerging leaders in the field of conservation. Corps members are supported during their three- to 12-month service terms with cost of living stipends, food on projects, and free common housing on off days.

“One of ACE’s greatest achievements is breaking down prejudices and stereotypes through work relationships, finding a common cause of improving our national and state public lands such as the Grand Canyon trails,” said Brad Bippus, a member of the ACE Board of Directors since 2004 and owner of AZ Irrigation and Maintenance. “It’s an amazing model of cooperation and teamwork with individuals that would otherwise never have met. “

James Allen, professor and executive director of the School of Forestry at Northern Arizona University (NAU), also serves on the ACE Board of Directors and contends that ACE does “exceptionally good quality trail work. In addition, to all the work they’ve done at the Grand Canyon, other claims to fame include Walnut Canyon National Monument trail following a rock fall, and building the trail to the Granite Mountain Hotshot Memorial. One of ACE’s major points of pride is the quality of the work they do and how they instill that culture of quality in their corps members, which is something I hope they carry with them the rest of their lives.”

The Arizona Conservation Corps (AZCC) focuses on connecting youth, young adults and recent era military veterans with conservation service work projects on public lands. With operations throughout Arizona, the focus is on engaging individuals and strengthening communities through service and conservation. “Our work is very similar to ACE except we have different approaches, with the same outcome,” explained AZCC Field Supervisor Michael Welleford.

“I worked at the Grand Canyon for two years and every day we got to work in a place that people spend their lives thinking about visiting,” said Welleford.  “It’s the hardest work you’ll ever do in your life with the greatest outcome, plus I met the greatest people of my life there.” Welleford has worked in low-visibility, freezing snowy trail conditions, to be rewarded by an “incredible view” when the weather clears.

Currently, Anna Schroeder is working on the South Kaibab trail, about two miles from the rim. “We’re doing cyclical maintenance, which involves de-rocking the trail, digging out drains, and putting dirt back on the trail.”

Schroeder says she enjoys working at the Grand Canyon because of the beauty and people. She has worked for ACE for years.

“Collectively, there are about 130 program across the United States doing this work,” said Laura Herrin, ACE president and CEO. “Our programs are built from the original Civilian Conservation Corps. ACE has been working to restore and conserve the trails at the Grand Canyon for more than 15 years. It was our first site and we have been there ever since.”

Keeping the trails clear for the Xanterra Mule rides is one of the main objectives, says Xanterra South Rim Mule Operation Livery Manager John Berry. “When it snows, we clear the trail and work closely with the NPS for rock removal and other trail maintenance. Last year, we had an all-women trail crew. They were incredible and replaced dirt on South Kaibab Trail. They must have hauled at least 50 mule loads of dirt a day. It was pretty amazing. “

President Franklin D. Roosevelt established the CCC in 1933. This was a work relief program that gave millions of young men employment on environmental projects during the Great Depression. The program became a model for future conservation programs engaging young adults in community service and conservation activities. Ironically CCC built the Colorado River Trail (the most difficult Grand Canyon trail ever constructed), along with trails and walls around and in the Grand Canyon Village. The organization also did extensive work at Phantom Ranch. FBN

Even after a nine-hour tough work day on the trail, Anna Schroeder is still smiling as she hikes her way to the top.

Dante Fowler is an employee with the National Park Service Trails (NPS) at the Grand Canyon and has been working about three miles down the North Kaibab Trail. He works alongside crews with the American Conservation Corps (ACE) and Arizona Conservation Corps (AZCC) cleaning drains and rebuilding the trail.

“Arizona Conservation Corps has worked more than 300 weeks in the Grand Canyon in the last four years, working on iconic trails such as the Bright Angel and South Kaibab,” says ACC Operations Director Russ Dickerson. “They’ve been incredible experiences for our Corps members, who spend nine straight days working on the trails and camping out as a crew in the Grand Canyon National Park, learning trail maintenance skills as well as outdoor and leadership skills. “

Anna Schroeder has been working with ACE for nine months.

2 Responses to Stewards of the Trails Keeping Grand Canyon Accessible