You are here: Home / Archives for Edward Keable 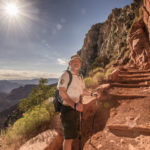 Edward Keable has had a lot of switchbacks he has had to conquer as the new Superintendent of the Grand Canyon National Park (GCNP), but without hesitation, he acknowledges that his new position is a “dream job.” “When I was offered this position, it took me less than a second to say yes,” he … END_OF_DOCUMENT_TOKEN_TO_BE_REPLACED