You are here: Home / Archives for environmental impact statement

Conservation groups and American Indian tribes today filed an appeal in the 9th Circuit Court challenging a lower court ruling that allowed a uranium mine near Grand Canyon National Park to re-open without updating decades-old environmental reviews. The Arizona 1 uranium mine is located near Kanab … END_OF_DOCUMENT_TOKEN_TO_BE_REPLACED

Mining companies and local residents are awaiting Secretary of the Interior Ken Salazar’s final decision to allow or ban hard rock mining for the next 20 years on approximately one million acres on the Arizona Strip north of Grand Canyon National Park. Surges in the price of uranium from about $10 … END_OF_DOCUMENT_TOKEN_TO_BE_REPLACED 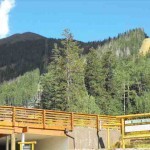 Arizona Snowbowl has won yet another legal battle, although the Save the Peaks Coalition is promising to appeal today's decision.  Judge Mary H. Murguia ruled against the plaintiffs, who were claiming the final environmental impact statement by the U.S. Forest Service ignored health … END_OF_DOCUMENT_TOKEN_TO_BE_REPLACED