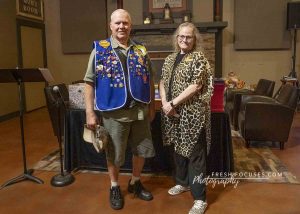 “Losing weight and maintaining a healthy lifestyle is complicated, but the solutions need not be complex.”

Hoping to see less of you,” may not be the kindest way to bid adieu, but for most of the members of Taking Off Pounds Successfully (TOPS Club, Inc.), it’s the hope and goal of this national non-profit hands-on approach to weight loss program.

TOPS has been helping and supporting members for more than 70 years. Recently, Northern Arizona held their annual TOPS Fall Rally in Prescott.

Awards were presented for several weight loss contests and recognition of Chapter Angels, those members who have gone above and beyond to help others in their quest to lose or maintain their weight.

Prescott Valley TOPS chapter member Phaylon Wallace was a TOPS member in 1986 when he lived in California. “During that time, I lost 35 pounds in six weeks and kept it off for several years, then gained it all back. When we moved to Prescott three years ago, I rejoined and I lost 64.8 pounds in a year.”

Wallace says he has about 16 pounds to go and admits that facing the scale every week has helped him to count calories and lose weight. “TOPS is really a good support group and I really like the chapter we have in Prescott Valley.”

Together with weekly meetings, other support includes the TOPS website and a bi-monthly magazine full of encouraging success stories, exercise routines, recipes and articles on health.

“There is an internal urge in all of us to seek complex solutions for complex problems,” said TOPS President Rick Danforth, who lost 100 pounds and posts biweekly blogs on the Facebook page. “Losing weight and maintaining a healthy lifestyle is complicated, but the solutions need not be complex.”

Rim Rock resident Betty Strehlow has been in TOPS since 1962. The spry and energetic 95-year-old said she started going to TOPS in her late 30s. “It took about seven months to lose 17 pounds. Then we moved to Boston and I gained it all back, plus more. Boston is a great place to eat and I love seafood,” she said.

Keeping Off Pounds Sensibly (KOPS) is the goal of TOPS members and Strehlow has reached that goal. “I might go up or down a few pounds, but I maintain my KOPS status,” she said. “You have to keep going. Nobody is going to do it for you.”

Meetings include private weigh-ins, recitations of encouraging mantras and songs, celebrations of weight loss, up-to-date information on nutrition, discussions on topics relating to health and exercise, and tools to lose and manage weight.

Proclaiming that the scale is the one thing that has really helped her lose 143 pounds, Camp Verde businesswoman Joyce Manifee serves as a co-leader for her chapter. “I love TOPS – the fellowship and the programs are great.”

TOPS Arizona Coordinator Teri Boyd serves as a volunteer in her position. “I do it because I love TOPS, I love our members and there’s just a huge need out there. Because TOPS is not for profit, does not advertise and has a very low membership fee, word gets out by word-of-mouth, and I like to be a mouth for TOPS. I go to health fairs and speak at chapters around the state.”

“TOPS is like my family,” said Sylvester. “If I feel down and out, I go to my chapter in Prescott, weigh in and they encourage me and I encourage them. It’s so worthwhile and so personable. This Annual Fall Rally is a huge celebration and we have so much fun.”

The concept of TOPS began around a kitchen table in 1948, when Wisconsin homemaker Esther Manz sat with friends who were discouraged by their weight. Deciding to meet once a week and weigh in, they began to lose weight. When a local newspaper picked up the story, others became interested.

The headquarters is located in Milwaukee.

Now, with thousands of chapters throughout the United States and Canada, TOPS members can meet online as well as at local chapters. FBN