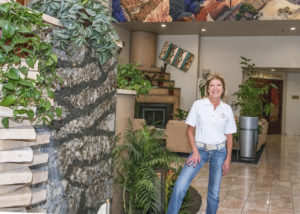 Cleaning hotel rooms, working at the front desk and serving as a hostess and cashier is not typical for most nine-year old girls, but for Ann Serna, it was a way of life and perhaps the boost that landed her in the role she has today as owner and general manager of the Grand Canyon Plaza Hotel.

“My father, Franz Rutter, worked for Fred Harvey in Chicago and was responsible for turning six restaurants around so they were profitable,” said Serna. “They were impressed with his work and in 1968, asked him to come to the Grand Canyon to oversee the Fred Harvey restaurants here, Bright Angel, Maswik, El Tovar, Yavapai, Desert View and the Cameron operation.”

Serna was six when they moved to the Grand Canyon.

“We lived and went to school in the Grand Canyon Village and after school we would go to work sometimes until 10 at night at the hotel. My dad was German and worked hard. We worked seven days a week.”

Today, the Grand Canyon Plaza Hotel has 232 rooms, three complexes, replete with spa, restaurant and saloon as well as a newly renovated atrium the size of a football field. “We’ve been renovating for the last seven years. Once we’re finished, we’ll start the process all over again,” said Serna.

As owner/operators of the hotel, Serna shares her position with her husband, Louie. “He does the outside grounds work and building maintenance and I oversee the inside – accounting, front desk and restaurant operations.”

Serna says the hotel has 110 staff members. “One of my employees has been with us for 43 years and most over 20 years.”

“She loves and adores her employees, and she takes care of us,” said Front Desk Manager Racheal Rivera. “She’s has been a public figure here at the Grand Canyon and she’s a strong supporter of the school and fire department.”

Front Desk Assistant Manager Jamie Hoekstra has worked for the Grand Canyon Plaza Hotel on and off for 25 years. “I came here when I was 17 and I keep coming back. I grew up with them. They’re like family to me and I love it here.”

Along with her long hours on the job, Serna also strives to give to the community. “Ann was one of two main people here who have supported the Tusayan Fire Department. I cannot stress how appreciative we are to them,” said Tusayan Fire Chief Greg Brush. “Due to circumstances, our funding could be cut in 2020. The Sernas have offered to sponsor a Friday night fundraiser at their Wagon Wheel Salon once a month. For five hours, 100% of all food and drink revenue goes to the Tusayan Fire Department. It’s unbelievable.”

To fulfill her dad’s dream of owning a winery, the Sernas purchased 143 acres outside of Williams and opened Wagon Wheel Winery. “Louie and I bought 1,000 plants from France and planted them, but the vines couldn’t grow at such a high altitude. So, we source our grapes from Arizona vineyards down south and crush, blend, ferment, bottle and label. I’m involved from start to finish.”

The couple lives in Flagstaff on weekends and on the way home, they stop at the winery to check on things. “I love both Tusayan and Flagstaff.”

Another fundraiser that Serna supports is Acts of Kindness in Flagstaff, run by her golfing partner Kathy Flores, owner of several Subways in Northern Arizona. Acts of Kindness assembles bags of gifts to give to people who have lost loved ones to suicide. They also make bags for first responders.

“Ann is one of the most giving people I know and so quiet and soft-spoken, but a very strong woman,” said Flores. “We are very grateful for her support.”

“Louie and I were both widows,” said Serna. “I’ve got three girls and he has two boys and a girl so it’s definitely a Brady Bunch,” said Serna.

“In order to do well, you need to love what you do,” she said. “My advice for women in business is to be diligent, believe in yourself, have faith in yourself and listen to your instincts. Also, whatever you want, go and get it. Don’t let anybody stop you.” FBN