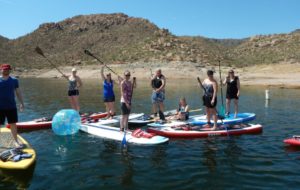 Chad Brockman was born to surf. He grew up on the beaches of Waikiki and lived in the waves – before school, during school, after school – every chance he got. A significant moment in his life occurred at age six when he met legendary Olympic swimming champion Duke Kahanamoku, a Native Hawaiian who popularized the ancient Hawaiian sport of surfing. “I distinctly remember Duke’s enormous hands, stout posture and welcoming gestures,” he said.

Like Kahanamoku, Brockman is passionate about sharing his love for the water, and all things water sports, with others. He’s surfed with the best, crafted high-performance boards, competed as a water skier and professionally raced speed boats. Today, he teaches people of all ages how to stand up paddle (SUP) from his business at Bartlett Lake Marina, Go Stand Up Paddle, northeast of Scottsdale in the Tonto National Forest.

But this year, late spring in the Valley, there has been a noticeable lack of interest at the lake. “People are still snowboarding and skiing,” he said recently at the quiet marina.

Baffling, because the water and air temperatures are lovely, the lake is smooth and Brockman has a dock full of boards ready to launch.

Two hours away, outdoor recreationists are indeed playing in the snow. Arizona Snowbowl is one of only a few U.S. ski resorts open in May, according to OnTheSnow.com and SnowBrains.com.

Snowbowl officials report 2016-2017 as their longest season on record, with 147 ski days spanning seven months, November through May.

“We’ve had the most natural snow in 12 years, 328 inches,” said Snowbowl’s Ksenia Hartl. “This is the first year ever we’re celebrating Cinco de Mayo on the slopes!”

Another first for Snowbowl, a high-speed chairlift. The Grand Canyon Express debuted on opening day and has been credited with dispersing the crowds and enhancing the Snowbowl experience.

As the snow turns to slush and the 2016-2017 ski season melts into memories, activity on desert lakes will no doubt heat up. Brockman and his surf dog, Red, are standing by. For more information, visit GoStandUpPaddle.com. FBN