You are here: Home / Business / Warming Altitudes with Cajun Spice 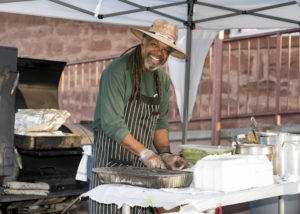 Chef Eddie Bibb shares what he learned from his mama and New Orleans’ legendary Chase family.

Bridging the culinary gap between New Orleans and Flagstaff is the goal of Altitudes Bar & Grill Chef Eddie Bibb, whose hope is to bring his version of Cajun Creole cuisine to Northern Arizona “one dish at a time.”

“Eddie has become a part of our family,” said Altitudes Bar & Grill owner Lynda Fleischer. “He was a valued return customer and would hang out with us and always talk about his mama and the times he spent helping her prepare meals. Then, we found out about his amazing cooking!”

Bibb began creating lunch specials for Altitudes, and Fleischer says his dishes are a big hit.

“I come every other Thursday because that’s when Eddie cooks,” said local resident Colleen Tucker, who was dining with three of her friends. “The Coubion Gumbo is the best dish I’ve tried yet.”

A native of Algiers, New Orleans, Bibb lived there until he was 8 years old. “My dad joined the Air Force and we moved around, from Alaska all the way to New Hampshire, where I went to high school.”

Bibb’s zeal for food and cooking eventually led him back to New Orleans to attend culinary school and work at the legendary Dooky Chase’s Restaurant. “I wanted to learn from the late Leah Chase, who is known as the matriarch of cooking in New Orleans. So I started as a dishwasher and worked my way up to sous chef.”

“Our cooks are watching Eddie and he is such a great example to those who are young and learning,” said Fleischer. “He’s a happy-go-lucky guy, easy to get along with and such a great chef, plus he’s very clean and does everything the right way.”

Fleischer says he’s also a great conversationalist and the customers love him. “His presence commands an audience.”

Bibb has lived in Flagstaff since 2017. “I visited in 2009 and always wanted to come back here.” In addition to his position at Altitudes Bar and Grill, Bibb is a private chef and caterer with his Chef Eddie’s BBQ & Creole Kitchen.

“I’m very passionate about food and it gives me joy when I see people enjoying my cooking,” says Bibb. “It’s not work for me, and my hope is that I can educate and expose people to different cuisines.”

In keeping with the seasons, Bibb will be preparing hearty gumbos, Jambalayas, Étouffées and various stews. Conversely, the summer menu will feature a lighter fare of crab and shrimp salads and ceviche.

“Everything that I’ve tried that Eddie cooks is excellent,” said BEC Southwest Project Manager Steve Bernard. “It’s authentic Louisiana cooking with legit ingredients and the flavors are fantastic. The catfish Po’ Boy was the best I’ve ever had.”

Going on 18 years in business, Altitudes Bar and Grill is owned and operated by Lynda Fleischer and Paul Joerger. “The manifestation of our restaurant came out of a desire to recreate the Mainstreet Bar & Grill, which is no longer open but is now a catering service.”

Outside of the kitchen, Bibb enjoys hiking, fishing, camping and dabbles in construction. He has two grown sons.

He says, “I’m just a normal guy trying to do my thing.”

Rio de Janeiro. Never been there for Carnival, but maybe someday!

I’m inspired by my mom and my dad and Chef Bobby Flay.

Any chocolate, dark or light.

I like to read and watch movies. I’m a movie guy and like to watch anything that’s good. FBN